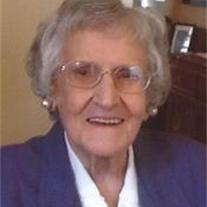 Frances Eugenia Mitchell Houston passed away on September 18, 2013 at the age of 97 with her family by her side. A lifelong resident of Lincoln County, she was born October 16, 1915 near Okete, Missouri, to Forest Eugene and Justena Mae Finley Mitchell. Frances married Louis B. Houston, who preceded her in death in 1980. After residing for many years on the Houston family farm, she moved to Troy, where she lived until her death. Frances was a valued and loved community member with deep roots in the area. She was a member of the Mt. Zion Associate Reformed Presbyterian Church near Elsberry, joining the church in 1928. In addition, she held a lifetime membership in the American Bible Society and was on the committee for the Presbytery of the Mississippi Valley. She was a highly regarded and valued employee of Warrenton Garment Factory for 13 years, where she worked in addition to her families’ homes and farms. Frances was active with the Older Adult Transportation Service (OATS) for years as well. Frances was dedicated to her faith and her family. Her interests included gardening, sewing, history, traveling, and genealogy. Frances continued learning until late in life and embraced the incredible changes she witnessed in the world. This attitude and steadfast commitment to her health enabled her to maintain active relationships with friends and family. Frances was the beloved mother of Louis Eugene Houston and his wife Becky of Elsberry, Pauline Steeves and her husband Paul of DeLand, Florida, Elizabeth Walton and her husband Hank of Kinderhook, Illinois, Fran Grimes and her husband Jim of Eolia, and Ben Houston and his wife Melba of Elsberry. Frances also was a devoted mother to four daughters upon her marriage to Louis: Margaret Bruce Assaf of St. Louis, Edna Ann Waggoner of Elsberry, and Betty Jo Palmer and Mary Alice Houston, who preceded her in death. Her three sons-in-law also preceded her in death, John Assaf, Jack Palmer, and Bill Waggoner. In addition to her nine children, she is survived by a sister, Mary Agnes Mitchell of Elsberry, and 16 grandchildren: Ashley (Grimes) Engler and her husband Clint, Drew Grimes and his wife Stephanie, Cameron Houston, Mitchell Houston, Gene Houston and his wife Tammie, Louis Edward Houston and his wife Donna, Tena Houston and her partner Shannon, Patsy Palmer and her husband Talbot D’Alemberte, Cathryn Steeves and her husband Steve Perkins, Kari Steeves and her husband David Sklar, Hally Franz and her husband Tim, Ellen Richards and her husband Jarrod, Debbie Waggoner, Doug Waggoner and his wife Nancy, Garland Walton, and Leigh Walton and her husband George Cronin. Frances was preceded in death by one grandson, Bruce Palmer. Frances is also survived by 15 great grandchildren, four great-great grandchildren, and many cousins and dear friends. A visitation will be held on Friday, September 20th, from 5:00 p.m. to 8:00 p.m. at the Kemper-Marsh-Millard Funeral Home/ Troy Chapel. The funeral will occur on Saturday, September 21st, at 10:00 a.m.at the Mt. Zion Associate Reform Presbyterian Church on Highway V near Elsberry. Gifts in her memory may be made to the Mt. Zion Associate Reformed Presbyterian Church, 861 Highway V, Troy, MO 63379, or to the Bonclarken Conference Center Inc., a 501(c)(3) ministry, 500 Pine Drive, Flat Rock, NC 28731-9541. Arrangements under the care of Kemper-Marsh-Millard Family Funeral Chapel, 351 Monroe Street Troy, MO 63379. Online condolences may be made at www.kempermarshmillardfamilychapels.com Ph.(636) 528-8221

Frances Eugenia Mitchell Houston passed away on September 18, 2013 at the age of 97 with her family by her side. A lifelong resident of Lincoln County, she was born October 16, 1915 near Okete, Missouri, to Forest Eugene and Justena Mae Finley... View Obituary & Service Information

The family of Frances Houston created this Life Tributes page to make it easy to share your memories.

Send flowers to the Houston family.