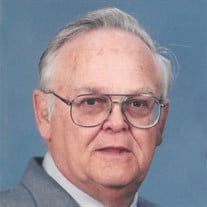 Francis Alfred Wagner, 88, of Louisiana, Missouri, passed away peacefully on Sunday, September 23, 2018 at Park Place in O’Fallon, Missouri. He was born on May 19, 1930 in Mattese, Missouri and was the son of the late Frank and Clara (Windmueller) Wagner. He was united in marriage to Mary C. Benz on October 21, 1950 at the All Saints Church in University City, Missouri and to this union four children were born. Francis was raised in Troy, MO and graduated from Buchanan High in 1948. He was the first of his family to complete High School and was a skilled and hard worker. He moved to Louisiana, MO in 1968 and there he spent 47 wonderful years with his wife, Mary. Francis was a supervisor at Holcim Cement Company for 27 years and retired in 1990. He was a skilled cabinet maker and made each member of his family a beautiful piece for them to treasure. Francis and Mary traveled the 48 States, where they would visit the National Parks. He was an avid reader who enjoyed the author Louis L’Amour. Francis was a member of St. Joseph Catholic Church in Louisiana, Missouri. He valued the time he spent with his family. He is survived by his loving wife of 67 years, Mary C. Wagner of O’Fallon, MO; one son and two daughters: David Wagner and wife Jody of Kirkwood, MO, Patricia Thompson and husband Everett of Richmond, MO and Susan Greenwood and husband Rick of Bowling Green, MO; one daughter-in-law, Janet Wagner of Monroe City, MO; nineteen grandchildren: Brendon Wagner, Michael (Gen) Wagner, Laurel Wagner, Nick Wagner, Nancy (Alan) Enriquez, Christy (Steve) DeLaporte, Ben Thompson, Andy (Leah) Thompson, Mary (Joel) Roberts, Josh Thompson, Joe Thompson, Ericca (Travis) Thornhill, Catherine Carlson, Bridget (Chris) Beacom, Emma (Quentin) Kuntz and Stephanie (Tom) Sellars; fourteen great-grandchildren: JaShon, Eli, Mia, Alex, Emily, Kyle, Ryan, Julia, Luke, Hayden, Hannah, Vash, T.C. and Riddik; nieces, nephews and friends. He was preceded in death by his parents, his son, Steven Wagner, grandchildren: Alan, Jonathon, Paul and Grace, siblings: Walter, Phillip, Louise, Helen, Millie, Al and Mary. Friends will be received from 5:00 p.m. to 8:00 p.m. on Saturday, September 29, 2018 at KEMPER-MILLARD-KEIM Family Funeral Chapel, located at 351 Monroe Street Troy, MO 63379. A funeral mass will be held at 10:00 a.m. on Saturday, October 6, 2018 at St. Joseph Catholic Church located at 508 N 3rd St. Louisiana, MO 63353. Interment will be held at the Sacred Heart Catholic Cemetery in Troy, MO. In lieu of flowers expressions of sympathy may be made to the Louisiana Public Library in care of KEMPER-MILLARD-KEIM Family Funeral Chapel, P.O. Box 222 Troy, MO 63379. Arrangements are under the direction of KEMPER-MILLARD-KEIM Family Funeral Chapel; 351 Monroe Street Troy, MO 63379. Online condolences may be made at www.kempermillardkeimfamilyfuneralchapel.com Phone 636-528-8221

Francis Alfred Wagner, 88, of Louisiana, Missouri, passed away peacefully on Sunday, September 23, 2018 at Park Place in O&#8217;Fallon, Missouri. He was born on May 19, 1930 in Mattese, Missouri and was the son of the late Frank and Clara (Windmueller)... View Obituary & Service Information

The family of Francis Alfred Wagner created this Life Tributes page to make it easy to share your memories.

Send flowers to the Wagner family.