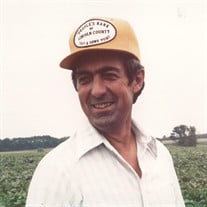 Frank William Kadlec, 79 of Troy, Missouri, passed away peacefully surrounded by his family on Sunday, November 27, 2016 at Lincoln County Nursing and Rehab in Troy, Missouri. He was born on February 24, 1937 in Vandalia, IL and was the son of Frank A. and Adelia (Martinek) Kadlec. Frank was united in marriage to Janet Evenson and she preceded him in death. He was later united in marriage to Bobbi L. Thornhill on October 17, 1986 at the Moscow Mills United Methodist Church in Moscow Mills, Missouri. Frank graduated from Buchanan High in 1954. He started farming at a young age, harvesting crops and raising livestock. Frank worked various jobs over his lifetime, he had a true passion for the Forestry Division with the Missouri Department of Conservation in Warrenton for over 38 years. While working in the Forestry Division, he became very close with the Lincoln County Fire Department serving numerous terms on the board and earned The “868” Award. He mowed the fairways at the Woods Fort Golf Course for many years. Frank served as one of the Board of Directors for 30 years on the Lincoln County Farmers Mutual Board. He enjoyed spending time with his family, especially spoiling his great grandchildren. Frank and Bobbi shared a lot of memories together, their Sunday trips to the Wentzville flea markets, where he would try to find a new hammer to add to his collection. Frank is survived by his loving wife of 30 years, Bobbi L. Kadlec of Troy; four daughters and one son: Theresa Black of Troy, Debbie Wiss and husband Albert of Hawk Point, Patty Parrish and significant other Carter Turnbull of Springfield, Frank Joseph Kadlec and significant other Sharona Tophinke of Louisville and Misti Lindsey and significant other Eric Knox of Troy; two sisters: Annette Stepanek and husband Earl of St. Paul and Jean Meyer and husband Martin of Troy; father-in-law, Bobby Thornhill of Moscow Mills; one sister-in-law, Barb Percy and husband Dennis of Moscow Mills; ten grandchildren: Amanda Klass (David), Denise Brinkmeyer (Brandon), Josh Parrish (Lauren), Katie Henke (Aaron), Courtney Kadlec, Kacey Kadlec, Kirsten Bowman, Brittany Bowman, Kobe Bowman and Sidney Bowman; three great grandchildren: Brayden, Callie and Emma Brinkmeyer and another on the way, Graham Russell Parrish, nieces, nephews, cousins and many friends. He was preceded in death by his father Frank A., mother Adelia, first wife Janet, sister-in-law, Beverly (Thornhill) Menne and mothers-in-law: Bertha Thornhill and Louise Thornhill. Friends will be received from 1:00 p.m. to 6:00 p.m. on Wednesday, November 30, 2016 at Kemper-Millard-Keim Family Funeral Chapel, located at 351 Monroe St. Troy, MO 63379. Funeral service will be held at 6:30 p.m. on Wednesday, November 30, 2016 at the Chapel. Officiating the service will be Pastor Wes Denham. In lieu of flowers expressions of sympathy may be made to Lincoln County Firefighters Foundation in care of Kemper-Millard-Keim Family Funeral Chapel P.O. Box 222 Troy, MO 63379. Arrangements are under the direction of Kemper-Millard-Keim Family Funeral Chapel; 351 Monroe Street, Troy, Missouri 63379. Online condolences may be made at www.kempermillardkeimfamilyfuneralchapel.com Phone 636-528-8221

Frank William Kadlec, 79 of Troy, Missouri, passed away peacefully surrounded by his family on Sunday, November 27, 2016 at Lincoln County Nursing and Rehab in Troy, Missouri. He was born on February 24, 1937 in Vandalia, IL and was the son... View Obituary & Service Information

The family of Frank William Kadlec created this Life Tributes page to make it easy to share your memories.

Send flowers to the Kadlec family.