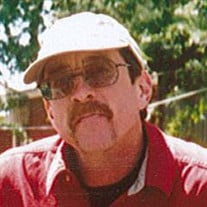 Gary William Koenig, 56, of High Ridge, Missouri, passed away on Saturday, July 5, 2014 at the St. Claire Hospital in Fenton, Missouri. He was born on October 7, 1957 in St. Louis, Missouri, a son of Paul C. and Bernice L. (Bass) Koenig. Gary graduated from Buchanan High School in 1976. He worked for the City of Clayton for many years and was a well-respected arborist for numerous companies and private sector in the City of St. Louis. Gary was a very talented artist, he had a beautiful voice and loved music. He had a real love for horses. He is survived by his one son, William Christopher Koenig of Fenton, Missouri; father, Paul Koenig, Sr. of Troy, Missouri; one brother, Paul Koenig, Jr. of Columbia, Missouri; one sister, Linda S. Garcia and husband, Robert of Riverbank, California; nieces, nephews, cousins and friends. He was preceded in death by his mother Bernice on March 6, 2014. Friends will be received from 2:00 p.m. to 3:30 p.m. on Saturday, July 12, 2014 at KEMPER-MARSH-MILLARD Family Funeral Home / Troy Chapel. Funeral service will be held at 3:30 p.m. on Saturday, July 12, 2014 at KEMPER-MARSH-MILLARD Family Funeral Home / Troy Chapel. Officiating the service will be Pastor Gary McCracken. Interment will be held at the Troy City Cemetery. Expressions of sympathy may be made to the American Cancer Society, in care of Kemper-Marsh-Millard Family Funeral Chapels, P.O. Box 222 Troy, MO 63379. Online condolences may be made atwww.kempermarshmillardfamilychapels.com ph. (636) 528-8221.

The family of Gary William Koenig created this Life Tributes page to make it easy to share your memories.

Send flowers to the Koenig family.