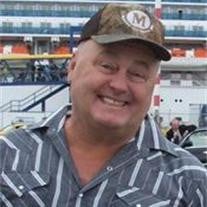 Gary Puetz, 61, of Warrenton, Missouri, passed away on Friday, February 15, 2013. He was born March 13, 1951 in Warrenton, Missouri, a son of Karl and Ralline (Rall) Puetz. He was united in marriage to Mary Ann Amrein on August 9, 1975 in Warrenton, Missouri. Gary graduated from Warrenton High School in 1969. He was a lifelong farmer and truck driver. He was a member of the Hawk Point VFW and enjoyed bird hunting. He is survived by his wife, Mary Ann Puetz of Warrenton, Missouri; two sons: Brent Puetz and wife, Jamie of Washington, Missouri and Corey Puetz of Warrenton, Missouri; siblings: Karlyne, Kathleen, Karen, Dennis, Ronald, Theodore and Karl; three granddaughters: Kelsey, Madison and Haley. He was preceded in death by his parents. Friends will be received from 12:00 p.m. to 3:00 p.m. on Sunday, February 17, 2013 at KEMPER-MARSH-MILLARD Family Funeral Home / Hawk Point Chapel. Funeral services will be held at 3:00 p.m. on Sunday, February 17, 2013 at the Chapel. Expression of sympathy may be made to the Food For The Poor. Arrangements are under the direction of Kemper-Marsh-Millard Family Funeral Chapel; 41 Farm Lane Hawk Point, MO 63349 Online condolences may be made at www.millardfamilychapels.com Ph.(636) 338-4375

The family of Gary Puetz created this Life Tributes page to make it easy to share your memories.

Gary Puetz, 61, of Warrenton, Missouri, passed away on Friday,...

Send flowers to the Puetz family.