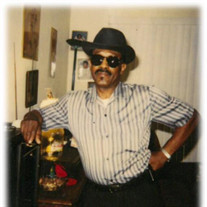 George Green, 78, of Winfield, Missouri passed away at 4:15 p.m. on Wednesday, May 29, 2019 at his residence in Winfield, Missouri. George was born on October 6, 1940 in Yazoo City, Mississippi a son of the late Herman Green, Sr. and Mary Louise Green. He was one of fourteen children. George was united in marriage to the love of his life Annie Johnson on September 20, 1969 in Chicago, Illinois. George graduated from Troy Buchanan High School in 1958, entered the United States Army and was honorably discharged following his return to the United States . George was a man of many talents working as an Electrician, Engineer and Security Guard at Intertect Group and retired in 2002. He would attend meetings at the local VFW Posts, American Legion Halls, Troy Elks Lodge #2805 and Veteran’s Coffee Talk. George always kept himself busy tinkering on little projects around the house and making sure his dog, Paco went for his daily walks. He enjoyed having family over for many great laughs and his delicious BBQ. He could always be found cooking in the kitchen, George took great pride in taking care of his beautiful wife Annie. He will be missed by all who knew him. He leaves to mourn his loving wife, Annie Green of Winfield, MO; four sons and two daughters: George Green (Brenda) of Ft. Worth, TX, Sylvia Moore of Florissant, MO, Towana Kernan (Donald) of Milwalke,WI, Deleon Johnson of Milwaukee, WI, George Green Jr. (La-keisha) of St. Louis, MO and Gerald Eugene Green Sr. (Cheryl Morrison) of Winfield, MO; two sisters: Vera White and husband Louis of Troy, MO and Sandy Ray of Coppell, TX; daughter-in-law: Vernisha Green of Chicgo, IL; one aunt: Minnie “Precious” Cherry of MS;25 grand children and 16 great grandchildren; numerous sisters-in-law, nieces, nephews, cousins and many, many friends. He was preceded in death by his parents: Herman, Sr. and Mary Louise Green; one daughter Yolanda Johnson and one infant son Otis Green six brothers: Homer, Herman, Jr., Oscar, Benjamin, Charles and Jessie; four sisters: Mary Walls, Lillie Ecford, Florence Green and Annie Green, one niece Pam, nephews: Stan Ecford and Eric Sydnor. Family and friends will be received from 4:00 p.m. to 7:00 p.m. on Tuesday, June 4, 2019 at KEMPER-MILLARD-KEIM Family Funeral Chapel located at 351 Monroe Street Troy, MO 63379. An additional visitation will be held from 1:00 p.m. to 2:00 p.m. on Wednesday, June 5, 2019 with the service being held at 2:00 p.m. at KEMPER-MILLARD-KEIM Family Funeral Chapel in Troy, MO. Private Interment will be held. In lieu of flowers expressions of sympathy may be made to the American Cancer Society in care of Kemper-Millard-Keim Family Funeral Chapel P.O. Box 222 Troy, MO 63379. Arrangements are under the direction of Kemper-Millard-Keim Family Funeral Chapel; 351 Monroe Street, Troy, Missouri 63379. Online condolences may be made at www.kempermillardkeimfamilyfuneralchapel.com Phone 636-528-8221

George Green, 78, of Winfield, Missouri passed away at 4:15 p.m. on Wednesday, May 29, 2019 at his residence in Winfield, Missouri. George was born on October 6, 1940 in Yazoo City, Mississippi a son of the late Herman Green, Sr. and Mary Louise... View Obituary & Service Information

The family of George Green created this Life Tributes page to make it easy to share your memories.

Send flowers to the Green family.