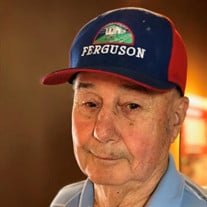 Gerald “Jerry” C. Means, 89, of Chamois passed to his eternal reward peacefully in Ferguson, Missouri on the 24th of May 2018. He was born on the 18th of December 1928. The son of the late Benjamin Joseph (B.J) and Anna (Wolz) Means. Jerry attended Assumption school in Morrison and Chamois High School. He served his country in the United States Army at Fort Chaffee Arkansas. He married Clarine M. Baumstark on the 14th of October 1950. She preceded him in death on the 2nd of August 2017, after 67 years of marriage and from this union they had seven children. He worked for Greisdeck Bros Brewing, Falstaff and Anheuser Busch until his retirement and moved to Chamois. Jerry was an active member of his Church, serving in many capacities especially the Knights of Columbus. He was also a member of the Chamois Lions Club and American Legion Post #506. He loved traveling with his wife, RVing and spending time with his grandchildren and great-grandchildren. Together he and Clarine had seven children: Dennis Paul, who died in 1959 at the age of 6; Rev. David Means; Catherine (Michael) Cunningham; Bernard (Leona) Means; Ann (Quinn) Corrigan; Susan (Ken) Knittel; and Patricia Steel (Mark). They have 12 grandchildren: Andrew (Maureen) Cunningham; Colleen (Chuck) Larsen; Chris (Bethre) Means; Katie Means; Bryan (Melissa) Means; Nick (Sarah) Miller; Tim (Stephanie) Miller; Dennis Miller; Leonard Knittel (Kayla); Kendra Knittel; Ben Steel; Evan Steel and 10 great-grandchildren: Caroline, Claire, Jack, Luke and George Cunningham; Gwendolyn Means; Harrison Means; Story Miller; Noah Miller and Leo Larsen and numerous nieces and nephews. He was preceded in death by his parents, his brothers: Ben and Wesley Means; three sisters: Mary Delhougne, Geneva Augustine and Evelyn Jones. Friends and family will be received from 9:30 a.m. to 11:00 a.m. on Tuesday, May 29, 2018 at Blessed Teresa of Calcutta located at 120 N Elizabeth Ave Ferguson, MO 63135. A Mass of Christian Burial will be held at 11:00 a.m. on Tuesday, May 29, 2018 at Blessed Teresa of Calcutta in Ferguson. Interment will be held at the Calvary Catholic Cemetery in St. Louis, Missouri. In lieu of flowers expressions of sympathy may be made to the Most Pure Heart of Mary in Chamois, MO or St. Vincent DePaul Blessed Teresa of Calcutta, in care of Kemper-Millard-Keim Family Funeral Chapel P.O. Box 222 Troy, MO 63379. Arrangements are under the care of Kemper-Millard-Keim Family Funeral Chapel, 351 Monroe Street Troy, MO 63379. Phone: (636) 528-8221 Condolences may be left for the family online atwww.kempermillardkeimfamilyfuneralchapel.com

The family of Gerald "Jerry" C. Means created this Life Tributes page to make it easy to share your memories.

Send flowers to the Means. family.