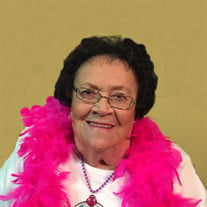 Gladys Geneva “Gever” (Ethington) Henebry, 95, of Troy, Missouri passed away peacefully in her home on her farm surrounded by her family on Saturday, April 8, 2017 in Troy, Missouri. She was born on March 12, 1922 in Lexington, Kentucky, a daughter of the late Amos and Minnie Ethington. She was united in marriage to Robert “Bob” Henebry on October 11, 1947 and he preceded her in death on December 2, 2012. To this union seven children were born. After moving to Missouri she was given the nickname “Kentucky“ and worked for a short period of time for the US Display Manufacturing Company in Hawk Point and the Heel Factory in Troy. Geneva was a devoted farmer’s wife, mother and grandmother. She primarily helped with the day to day operations of the family farm and raised six kids and spoiled many grandchildren and great-grandchildren. Geneva enjoyed having a full house and many laughs that were shared. She spent many hours beside her husband, Bob in the fields farming and still made the time to fix a delicious meal. Most of the time she used her very own fresh produce that she canned from her garden. Geneva was a member of the St. Mary’s Catholic Church and the VFW Ladies Auxiliary in Hawk Point. She enjoyed quilting and listening to music, some of her favorite toe tapping music was sung by Elvis and Alan Jackson. She is survived by her children: Richard Henebry of Troy, MO; Betty Anne Smith and husband Gene of Winfield, MO; Alice Amann of Hawk Point, MO; Donna Reale and husband Jim of Defiance, MO and Roberta Trost and husband Mike of Defiance, MO; daughter-in-law: Sissy Tuepker of Hawk Point, MO; one brother, Robert Ethington of Winfield, MO; twelve grandchildren: Mike Henebry (Terrilyn), Robert Henebry (Cassie), Michelle Henebry, Jill Dunard, Brian Dunard, Ken Dunard, Dawn Seeger (Darren), Heather Gray (Wayne), Heidi Owenby (Darron), Keith Henebry, Joseph Trost (Chelsey) and Andrew Trost; thirteen great-grandchildren Kaleb and Ashleigh Henebry, Layne, Jaxon, and Mason Henebry, Brenden Cockrell, Preston and Luke Seeger, Lilly, Brianna and Cooper Owenby, Arianna and Alysan Amann; nieces, nephews and many friends. She was preceded in death by her parents, her husband Robert “Bob” Henebry; one son, Kenneth Henebry; one infant daughter , Mary Jane Henebry; one sister, Elizabeth Abney; brothers: Amos, Cecil, Woodrow, Walter, Arthur, Charles and Harold; daughter-in-law, Penny Henebry; one son-in-law, Craig Amann; one grandson, Heath Amann and one infant granddaughter, Cynthia Amann. Friends will be received from 4:00 p.m. to 8:00 p.m. on Tuesday, April 11, 2017 at KEMPER-MILLARD-KEIM Family Funeral Chapel located at 41 Farm Lane Hawk Point MO 63349. Mass will be held at 11:00 a.m. on Wednesday, April 12, 2017 at the St. Mary’s Catholic Church located at 458 Main Street Hawk Point, MO 63349. Officiating the mass will be Father John Keenoy and Father Richard Stoltz. Interment will be held at St. Mary’s Catholic Cemetery. Expressions of sympathy may be made to The Family of Geneva Henebry in care of Kemper-Millard-Keim Family Funeral Chapel, P.O. Box 222 Troy, MO 63379. Arrangements are under the direction of KEMPER-MILLARD-KEIM Family Funeral Chapel; 41 Farm Lane Hawk Point, MO 63349. Online condolences may be made at www.kempermillardkeimfamilyfuneralchapel.com Phone 636-338-4375

The family of Gladys Geneva Henebry created this Life Tributes page to make it easy to share your memories.

Send flowers to the Henebry family.