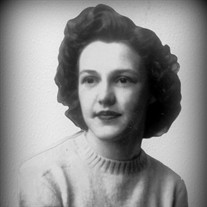 Grace Camille Bockhorst Hampel, 87 of Quincy, Illinois, formerly of Moscow Mills, Missouri passed away peacefully on November 22, 2014. Grace was born on November 1, 1927 to George “Amos” and Ruby (Shafer) Bockhorst. She was raised with her brothers Marion and J.E., along with her sister Ruby Jane. Grace attended Crab Apple School in Moscow Mills and graduated from Buchanan College in Troy, Mo. On October 27, 1946 she married Frank J. Hampel. To this marriage two children were born, Michael and Deborah. Frank preceded her in death on October 18, 2002. Grace’s early married days were spent helping manage the family farm, building fences and out buildings, working the ground, feeding and tending the livestock, chasing kids and keeping house. If it had not been for the efforts of Grace and the kids, the farm would not have been the success that it was. She was never paid any wages for being farm hand, crop manager, housekeeper, accountant, mechanic, mother and wife, but if she had been paid what she was worth, she would have been a very rich woman. After the kids were out of the house Grace decided to go back to school. Grace graduated from cosmetology school in St. Charles and worked for a time as a beautician, which was something that she enjoyed doing. Grace’s greatest joy was her children and later her grandchildren and great grandchildren. Grace also enjoyed doing genealogy research, being outside doing chores, her dogs, bird watching, reading, needlework and puzzles. Grace worked hard all of her life and in her later years she enjoyed every single day, doing what she wanted to do. She will be missed, but more importantly, remembered. Grace is survived by her one son, Michael (Billie) Hampel of Troy, MO; one daughter, Deborah (Robert) Hutter of Quincy, IL; one brother, J.E. (Irene) Bockhorst of Troy, MO; grandchildren, great grandchildren, numerous relatives, nieces and nephews. She was preceded in death by her parents, her husband, her brother, Marion Bockhorst and her sister, Ruby Jane Bockhorst. Friends will be received from 12:30 p.m. to 2:00 p.m. on Sunday, November 30, 2014 at KEMPER-MILLARD-KEIM Family Funeral Home/Troy Chapel, located at 351 Monroe Street Troy, MO 63379. A funeral service will be held at 2:00 p.m. on Sunday, November 30, 2014 at the Chapel. Officiating the service will be Pastor Eugene Rahmier. Serving as pallbearers will be Mike Huttenlocker, Dylan Huttenlocker, Kurt Johnley, Josh Harris, Randy Tiefenthaler and Ryan Willing and serving as honorary pallbearer J.E. Bockhorst. Interment will be held at the Friedens U.C.C. Cemetery in Moscow Mills, Missouri. Expressions of sympathy may be made to the Lincoln County Genealogical Society, in care of Kemper-Millard-Keim Family Funeral Chapels P.O. Box 222 Troy, MO 63379. Online condolences may be made at www.kempermillardkeimfamilychapels.com Ph. (636) 528-8221

The family of Grace C. Hampel created this Life Tributes page to make it easy to share your memories.

Send flowers to the Hampel family.