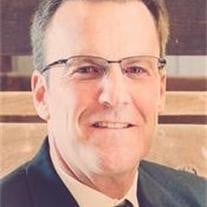 Gregory “Greg” Arthur Mix, 52 of Troy, Missouri, passed away on Monday, December 9, 2013 at his residence in Troy, Missouri, surrounded by his family. He is the son of the late Arthur B. and Carol (Dixon) Mix, he was born on January 20, 1961 in Honokaa, Hawaii. On July 10, 1983 he was united in marriage to Patricia “Trisha” Roberts in Iola, Kansas and to this union two sons were born, Clint and Eric. Greg graduated from Iola High School in 1979, continued his education at Allen County Community College, graduated in 1981 with an Associate’s Degree and graduated from Pittsburg State in 1984 with a Bachelors Degree and finished with his Masters in 1986. He was a teacher at the R-III School District for 20 years, teaching in various subjects. He also spent many years coaching wrestling and football and was a class sponsor for several classes. Greg was a member of the St. Stephen’s United Methodist Church. He was an avid Rams and Kansas City Chiefs fan as well as a fan of college football, NASCAR and golf. Greg spent many years working on his 1967 Chevy Nova that he loved doing “big old harry burnouts” in. He also enjoyed fixing and tinkering on motors, lawn mowers, bicycles, boats, and just about any other project he could think up. Greg also enjoyed hunting, fishing, gardening and spending time at the Lake of the Ozarks whenever time allowed. He is survived by his wife of 30 years, Trisha Mix of Troy, Missouri; two sons, Clint Mix and his wife, Carmen of Troy, Missouri and Eric Mix of Troy, Missouri; two brothers, Doug Mix and wife, Lois of Strongsville, Ohio and Mike Mix and wife, Jannifer of Lake of the Ozarks, Missouri; one sister, Kathryn Dulinsky and husband, Dave of Chicago, Illinois; one grandson, Preston Mix of Troy, Missouri; aunts, uncles, nieces, nephews and many friends. He was preceded in death by his father, Arthur on October 19, 2005 and mother Carol on January 7, 2011. Friends will be received from 4:00 p.m. to 8:00 p.m. on Friday, December 13, 2013 at St. Stephen United Methodist Church (101 St. Stephen Lane, Troy, MO 63379). Funeral service will be held at 1:00 p.m. on Saturday, December 14, 2013 at St. Stephen United Methodist Church in Troy, Missouri. Interment will be held at a later date at Aldersgate United Methodist Cemetery in Lee Summit, Missouri. A trust fund is being established for the Greg Mix Scholarship Fund and in lieu of flowers expression of sympathy may be made payable to Kemper-Marsh-Millard Family Funeral Chapels. In care of Kemper-Marsh-Millard Family Funeral Chapels, P.O. Box 222 Troy, MO 63379. Online condolences may be made at www.kempermarshmillardfamilychapels.com ph. (636) 528-8221.

Gregory “Greg” Arthur Mix, 52 of Troy, Missouri, passed away on Monday, December 9, 2013 at his residence in Troy, Missouri, surrounded by his family. He is the son of the late Arthur B. and Carol (Dixon) Mix, he was born on January 20, 1961... View Obituary & Service Information

The family of Gregory A. created this Life Tributes page to make it easy to share your memories.

Send flowers to the A. family.