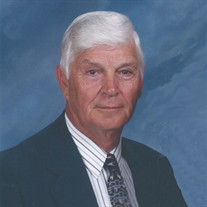 Harris E, Wiemann, 86, of Troy, Missouri passed away surrounded by his family on Tuesday, May 31, 2016 at St. Luke’s Hospital in Chesterfield. He was born on April 1, 1930 in Troy, Missouri and was the son of the late William and Amanda (Schneider) Wiemann. Harris married the love of his life, Doris S. Lavy on November 18, 1951 at the Zion United Church of Christ in Troy and to this union one son was born. Harris graduated from Buchanan High in 1949 and served in the United States Army as a military policeman. After being honorably discharged from the Army, he farmed and raised livestock. Harris was employed for 32 years at McDonnell Douglas and after his retirement wanted to lend a helping hand to his son, Kim, with Wiemann Construction. He was a busy man, who was always on the go. Doris and Harris traveled many miles to attend their grandsons’ sports events. Even with a busy schedule, he made time to read scripture with Doris in the evenings and accepted Jesus as his Savor. Harris enjoyed spending time in his garden and maintaining his lawn. He served numerous terms as a Board Member for the Troy R-III School District. Harris was a kind-hearted man, who had a gentle smile and was loved by all. He is survived by his loving wife of 64 years, Doris S. Wiemann of Troy; one son, Kim E. Wiemann and wife Natalie of Troy; three grandsons: Shea Wiemann and wife Abby, Corey Wiemann and wife Kelly of Columbia and Connor Wiemann of Troy; nieces, nephews and numerous friends. He was preceded in death by his parents, siblings: Clarence Wiemann, Anna Mae Leitman, Clyde Wiemann, Arvilla Madden, Kermet Wiemann, LeRoy Wiemann and one infant twin brother. Friends will be received from 3:00 p.m. to 8:00 p.m. on Thursday, June 2, 2016 at KEMPER-MILLARD-KEIM Family Funeral Chapel, located at 351 Monroe Street Troy, MO 63379. Funeral service will be held at 10:00 a.m. on Friday, June 3, 2016 at KEMPER-MILLARD-KEIM Family Funeral Chapel. Interment will be held at Troy City Cemetery in Troy, MO. In lieu of flowers expressions of sympathy may be made to The Family of Harris E. Wiemann. With Harris being an avid Troy Buchanan High School sports fan, the memorials will be donated in his memory, in care of Kemper-Millard-Keim Family Funeral Chapel, P.O. Box 222 Troy, MO 63379. Arrangements are under the direction of Kemper-Millard-Keim Family Funeral Chapel; 351 Monroe Street, Troy, Missouri 63379. Online condolences may be made at www.kempermillardkeimfamilyfuneralchapel.com Phone 636-528-8221

Harris E, Wiemann, 86, of Troy, Missouri passed away surrounded by his family on Tuesday, May 31, 2016 at St. Luke&#8217;s Hospital in Chesterfield. He was born on April 1, 1930 in Troy, Missouri and was the son of the late William and Amanda... View Obituary & Service Information

The family of Harris E. Wiemann created this Life Tributes page to make it easy to share your memories.

Send flowers to the Wiemann family.