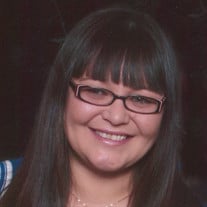 Heather Michell Brockmeyer, 42, of Winfield, Missouri, passed away on Tuesday, July 22, 2014 at her residence. She was born on October 31, 1971 in Springfield, Illinois, the daughter of Brian Dieter and Donna K. Mast. Heather graduated from Sanford-Brown College with an Associate’s Degree in Business. She worked in the financing department at MTM, Inc. and recently was a Teacher at Academy Too in Troy, Missouri. Heather enjoyed singing karaoke, listening to Michael Jackson, Elvis Presley and Madonna, watching classical movies with actors such as Marilyn Monroe, James Dean and Elvis Presley and watching, Sunday Football. Heather loved collecting Mickey Mouse, Coca Cola Memorabilia and had an assortment of shot glasses. She was fluent in Japanese and enjoyed the culture it had to offer. She had a contagious smile and would light up a room just with her presence. Heather loved spending time with her family. She is survived by her two daughters, Erica Whitchurch and husband, Daniel of Winfield, MO and Bobbisue Smith of Winfield, MO; mother, Donna Lemon and husband, Dave of Troy, MO; father, Brian Dieter of Texas; grandmother, Joyce Mast of Troy, MO; siblings, Isaac Dieter and wife, Linda of Sweden, Miguel Dieter and wife, Lisa of Indiana, Christia Dieter and husband, Daniel Ozuna of Texas, Juliet Dieter of Texas, Melissa Dieter and significant other, Ryan Kasper of O’Fallon, MO, Teresa Dieter of Maryland and Jesse Dieter of Texas; aunts and uncles, Brenda Saxe and husband, Larry of Troy, MO and Vince Mast and wife, Kim of Arizona; significant other, Justin Davis of St. Peters, MO; cousins and many friends. She was preceded in death by one brother, Shadrack Dieter in 1974 and one infant grandson, Ronnie Whitchurch in 2014 and grandfather, Donald Mast in 2013. Friends will be received from 1:00 p.m. to 4:00 p.m. on Saturday, July 26, 2014 at KEMPER-MILLARD-KEIM Family Funeral Home / Troy Chapel. Funeral services will be held at 4:00 p.m. on Saturday, July 26, 2014 at the chapel. In lieu of flowers expressions of sympathy may be made to The Family of Heather Brockmeyer. In care of Kemper-Millard-Keim Family Funeral Chapel; P.O. Box 222, Troy, MO 63379. Online condolences may be made at www.kempermillardkeimfamilychapels.com Ph.(636) 528-8221

Heather Michell Brockmeyer, 42, of Winfield, Missouri, passed away on Tuesday, July 22, 2014 at her residence. She was born on October 31, 1971 in Springfield, Illinois, the daughter of Brian Dieter and Donna K. Mast. Heather graduated from... View Obituary & Service Information

The family of Heather Michell Brockmeyer created this Life Tributes page to make it easy to share your memories.

Send flowers to the Brockmeyer family.