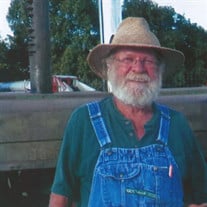 Hurley Dean Walker, 68, of Troy, passed away on Tuesday, April 21, 2015 at his residence in Troy, Missouri. He was born on December 5, 1946 in St. Charles, Missouri to Hurley Downing and Jennie (Lester) Walker. On December 23, 1998 in Warrenton, Missouri, he was united in marriage with Deborah Lou Evans and she preceded him in death on January 22, 2011. Hurley graduated from Buchanan High School in 1964. He entered the Army on October 21, 1970, he served one tour in Vietnam as a UH1 Helicopter Crew Chief and was honorably discharged on August 16, 1972. While serving his country he earned an Air Medal for his heroism, National Defense Service Medal, Vietnam Campaign Medal w/60 Device and a Vietnam Service Medal. He was a member of the American Legion Post # 1000 and a supporter of the local VFW Post. He loved being outdoors, tinkering in his yard and fishing with his son, grandson and family. Hurley’s passion was for antique tractors, he was always working on, or restoring a tractor and competing at the local tractor pulls. He owned several antique John Deere tractors throughout his lifetime, but his favorite were: Model B, Model R and he was currently restoring a Model G. Hurley enjoyed spending time with his family and friends. He is survived by his son, Kevin Dandois and wife Angela of O’Fallon; two step-children: Lori Ann Wood and husband Mike of St. Peters and David Martin and wife Chris of Troy; one son-in-law, Jerry Zerrer, Jr. of Hawk Point; one sister-in-law, Kathy Evans of Memphis, TN; eight grandchildren including Cameron Dandois and two great-grandchildren. He was preceded in death by his parents, his wife, one step-daughter, Lisa Zerrer and father-in-law and mother-in-law, Ansel and Ruth Evans. A graveside service will be held at 2:00 p.m. on Friday, April 24, 2015 at the Old Alexandria Cemetery, located at 87 Old Alexandria Rd Troy, MO. Expressions of sympathy may be made to the American Cancer Society in care of Kemper- Millard-Keim Family Funeral Chapel, P. O. Box 222, Troy MO ; P. O. Box 222, Troy MO, 63379. Online condolences may be made at www.kempermillardkeimfamilychapels.com Ph.(636) 528-8221

Hurley Dean Walker, 68, of Troy, passed away on Tuesday, April 21, 2015 at his residence in Troy, Missouri. He was born on December 5, 1946 in St. Charles, Missouri to Hurley Downing and Jennie (Lester) Walker. On December 23, 1998 in Warrenton,... View Obituary & Service Information

The family of Hurley Dean Walker created this Life Tributes page to make it easy to share your memories.

Hurley Dean Walker, 68, of Troy, passed away on Tuesday, April...

Send flowers to the Walker family.