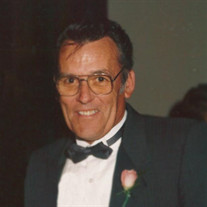 J.C. “Jay” Burns, 81, of Troy, Missouri, passed away on Tuesday, October 6, 2015 at his son’s residence in Troy, Missouri. He was born on April 12, 1934 in Marshall, AL a son of the late Dolphus and Rhodie Mae (Bennett) Burns. Jay entered the U.S. Army on September 23, 1953 in Montgomery, AL and was assigned to the 61st Infantry Regiment Fort Carson, CO. While serving his country he earned a National Defense Service Medal and a Medal of Good Conduct. Jay was honorably discharged on September 22, 1955 but was then transferred immediately to the Army Reserves for 8 years. He retired after over 30 years of dedication to McDonnell Douglas/Boeing. He was a member of the Sheet Metal Workers' Local 36. When Jay wasn’t working he enjoyed fishing, working on cars, going to garage sales and attending auctions. He is survived by his children: Sandy Parker of Albertville, AL, Tom Burns and wife Debbie of Troy, Julie Kersting of Wentzville and David Burns and wife Tina of Troy; grandchildren: Brad Burns (Sara), Kelly Nanney (Greg), Tiffany Schlemper (Kevin), Jennifer Harris, Garrett Burns, Melissa King and Robert King; 14 great-grandchildren; 2 great-great--grandchildren and numerous relatives. He was preceded in death by his parents, brothers and sister. Friends will be received from 6:00 p.m. to 8:00 p.m. on Monday, October 12, 2015 at the KEMPER-MILLARD-KEIM FAMILY FUNERAL HOME/TROY CHAPEL Expressions of sympathy may be made to the Billy Graham Evangelistic Association, in care of Kemper-Millard-Keim Family Funeral Chapels, P.O. Box 222 Troy, MO 63379. Arrangements are under the direction of Kemper-Millard-Keim Family Funeral Chapel; 351 Monroe Street, Troy, Missouri 63379. Online condolences may be made at www.kempermillardkeimfamilychapels.com Phone 636-528-8221

The family of J.C. "Jay" Burns created this Life Tributes page to make it easy to share your memories.

Send flowers to the Burns family.