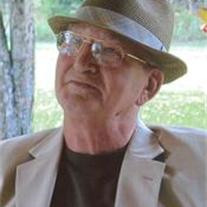 Jackie “Jack” L. Marlett, 75, of Troy, Missouri, passed away on Friday, November 8, 2013 at the Lincoln County Medical Center. He was born on September 3, 1938 in Warm Springs, Arkansas, a son of Emmett and Easter (Dalton) Marlett. He was united in marriage to Carolyn Dudley on January 7, 1961 in Redbud, Illinois. To this union three children were born. On September 30, 1955 Jack entered the Army in the 82nd Airborne in St. Louis, Missouri and was a radio operator. He entered with 225 men, he was one of the 35 that graduated and was honorably discharged on September 29, 1958 in Fort Leonard Wood, Missouri. Immediately out of the Army, Jack started his career at Boeing as an inspection foreman and after 39 years of dedication, he retired in 1997. Jack and Carolyn have spent the past 30 years of their life in Troy together and enjoyed bowling and playing cards together. He was a fisherman and a hunter in earlier years and most recently liked watching the Rams football team, mowing the yard, landscaping and keeping in touch with family and friends on facebook. Jack was a family man, who always thought of his family first. He is survived by his loving wife of 52 years, Carolyn Marlett of Troy, Missouri; children, Marcy Hinderliter, and husband, Delbert of Troy, Missouri, Mark Marlett and wife, Tara of Troy, Missouri, and Marty Marlett and wife, Theresa of O’Fallon, Missouri; siblings, Joseph E. Marlett and wife, Marita of Wentzville, Missouri, Bud Marlett of Maplewood, Missouri, Joe Chaney Maplewood, Missouri and Rosemary Komadulsky and husband, Steve of Maplewood, Missouri; five grandchildren, Alycia, Jackie, Monica, Nick and Lucas; nieces, nephews and many friends. He was preceded in death by his parents, two brothers, Gerald and Emmett Marlett. Funeral services will be held at 2:00 p.m. on Tuesday, November 12, 2013 at Kemper-Marsh-Millard Family Funeral Home/ Troy Chapel. Interment will be held at Troy City Cemetery with full military honors. Expressions of sympathy may be made to PALS. Arrangements are under the direction of Kemper-Marsh-Millard Family Funeral Chapel; P. O. Box 222, Troy MO. Online condolences may be made at www.kempermarshmillardfamilychapels.com Ph.(636) 528-8221

Jackie “Jack” L. Marlett, 75, of Troy, Missouri, passed away on Friday, November 8, 2013 at the Lincoln County Medical Center. He was born on September 3, 1938 in Warm Springs, Arkansas, a son of Emmett and Easter (Dalton) Marlett. He was... View Obituary & Service Information

The family of Jackie L. Marlett created this Life Tributes page to make it easy to share your memories.