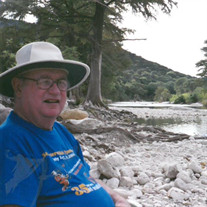 James Allen Hudson, Jr., 76, of Troy, Missouri, passed away on Monday, July 20, 2020 at Lincoln County Nursing and Rehab in Troy, Missouri. He was born on October 2, 1943 in Vandalia, Illinois, a son of Leslie “Les” and Lois (Peterman) Hudson. James graduated from Vandalia High School in 1961. He served his country in the United States Army from October 1, 1961 and was honorably discharged on October 3, 1968. James was a member of the Community of Christ Church in O’Fallon where he served as a Priest. He enjoyed helping with youth camp during the summers. James was a jack of all trades, who could fix anything and if he didn’t know how to he would figure it out. He was always tinkering on trucks and cars. He was good to everyone and helped anyone who was down on their luck. James loved the time he spent with his grandchildren. He is survived by his son Kevin Hudson of Foley, MO; three sisters: Jane Fanning of Springfield, MO, Rhonda Dollens of Springfield, MO and Ardis Wohbold of Mexico, MO; one sister-in-law, Nancy Hudson of CA; grandchildren: James Burke and Lindsey Brobst; two greatchildren: Brooklyn and Jaxi Brobst; nieces, nephews, cousins and friends. He was preceded in death by his parents Lois and Les, two brothers: Arthur and Eldon Hudson and three brothers-in-law: David Wohbold, Dick Fanning and Bob Dollens. Services will be held at 11:00 am on Monday, August 3, 2020 at Jefferson Barracks National Cemetery located at 2900 Sheridan Road St. Louis, MO 63125. Expressions of sympathy may be made to Disabled American Veterans in care of KEMPER-MILLARD-KEIM Family Funeral Chapel, P.O. Box 222 Troy, MO 63379. Arrangements are under the direction of KEMPER-MILLARD-KEIM Family Funeral Chapel; 351 Monroe Street Troy, MO 63379. Online condolences may be made at www.kempermillardkeimfamilyfuneralchapel.com Phone 636-528-8221

The family of James Allen Hudson created this Life Tributes page to make it easy to share your memories.

Send flowers to the Hudson family.