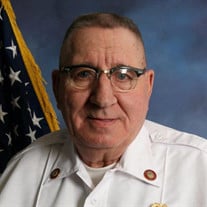 James “Jim” Burgess, Sr. 76, of Troy, Missouri passed away on Monday, May 30, 2016 at the Troy Manor. He was born on July 18, 1939 in Moscow Mills, Missouri and was the son of the late William Madison and Dorothy Eleanor (Bobeen) Burgess. Jim lived in Lincoln County his entire life, raising his children in Whiteside and moved to Troy in 1971. He was the Chief of the Lincoln County Fire Department for several years. Jim served on numerous boards, including as a Board of Director for the Lincoln County Ambulance District and the Rescue Squad. Owned and operated James S. Burgess, Sr. Repair and he worked on many vehicles over his lifetime. Jim was the recipient of 1984 Troy Chamber of Commerce Man of the Year Award. He is survived by his two sons: James Burgess, Jr. of Troy and Mike Burgess and wife Becky of Trenton, IL; one daughter, Debbie Madigan of Bowling Green; four sisters and one brother: Marcella Dunard and husband Bill of Troy, Judy Staten of Columbia, Dan Burgess and wife Sharon of Moscow Mills, Janice Kaiser and husband Dan of Carrollton, IL and Jo Comer and husband Mike of Troy; nine grandchildren: Michael, Kelly, Amberle, Andrew, Austin, Adam, Caitlin, Lauren and Erin; two great-grandchildren; nieces, nephews, cousins, those that became family from the Lincoln County Fire Department and many friends. He was preceded in death by his father, his mother and one nephew, Brian Dunard Friends will be received from 5:00 p.m. to 7:00 p.m. on Friday, June 3, 2016 at KEMPER-MILLARD-KEIM Family Funeral Chapel, located at 351 Monroe Street Troy, MO 63379. Funeral service will be held at 7:00 p.m. on Friday, June 3, 2016 at KEMPER-MILLARD-KEIM Family Funeral Chapel. Interment will be held at a later date. In lieu of flowers expressions of sympathy may be made to Lincoln County Firefighters Foundations, in care of Kemper-Millard-Keim Family Funeral Chapel, P.O. Box 222 Troy, MO 63379. Arrangements are under the direction of Kemper-Millard-Keim Family Funeral Chapel; 351 Monroe Street, Troy, Missouri 63379. Online condolences may be made at www.kempermillardkeimfamilyfuneralchapel.com Phone 636-528-8221

The family of James "Jim" Burgess, Sr. created this Life Tributes page to make it easy to share your memories.

Send flowers to the Burgess family.