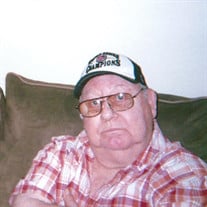 James “Jim” Ford Coleman, 76, of Troy, Missouri, passed away on Thursday, April 21, 2016 at his residence. He was born on May 31, 1939 in Akron, Ohio, a son of the late Clarence Delvin and Dortha Pearl (Beach) Coleman. Jim was united in marriage to Sheila Branscum on November 27, 1993 at the Elsberry United Methodist Church. Jim graduated high school and enlisted in the United States Air Force on March 10, 1959 and was honorably discharged on January 9, 1963. He was a Superintendent for Hussmann Refrigeration, overseeing the Sheet Metal operation and retired in 2003. Jim enjoyed wood working and spending time outdoors working on his yard. He was awarded Yard of the Month, when he lived in Moscow Mills. He is survived by his loving wife, Sheila Coleman of Troy; children: Jolene Schneider and husband Justin of Winfield, Terry Coleman and Christine Davis both of Texas and Russell Collins and wife Kendra of Silex; grandchildren: Michael, Jacob, Devonte, Devin, Kelcea, Samantha, Katherine, Nicholas, Steven, Alexandria and Jasmine; nieces, nephews, cousins and many friends. He was preceded in death by his parents, two brothers: Dewey and Clarence Coleman and two sisters: Dorthajean Meckler and Geraldine Gross. Funeral service will be held at 1:30 p.m. on Monday, April 25, 2016 at the Jefferson Barracks National Cemetery located at 2900 Sheridan Rd, St. Louis, MO 63125. Expressions of sympathy may be made to the Wounded Warriors, in care of Kemper-Millard-Keim Family Funeral Chapel, P.O. Box 222 Troy, MO 63379. Arrangements are under the direction of Kemper-Millard-Keim Family Funeral Chapel; 351 Monroe Street, Troy, Missouri 63379. Online condolences may be made at www.kempermillardkeimfamilyfuneralchapel.com Phone 636-528-8221

The family of James "Jim" Ford Coleman created this Life Tributes page to make it easy to share your memories.

Send flowers to the Coleman family.