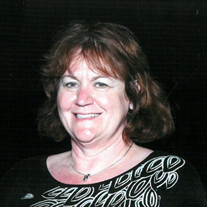 Jamy Lena Preul, 68, of Columbia, Missouri, passed away on Sunday, December 26 at the University of Missouri Hospital in Columbia, Missouri. She was a loving mother and grandmother, a loyal sister and sister-in-law, and a teacher for hundreds of students. She was born on March 19, 1953 in St Louis, Missouri, and her family moved to Truxton Missouri in 1966. She graduated from Troy-Buchanan High School in 1971. Her young adulthood was devoted to raising her four children. She graduated from the University of Missouri in 1987, and her career was as a teacher of adult basic education, in many different forms including educating other teachers. She tried retirement, but it did not stick, and she continued to teach adults throughout her life, always gaining the most satisfaction from her students’ achievements, such as a GED or a new job. She taught her children through her actions, such as having a homeless man join for Thanksgiving dinner or hosting a single mom with her kids in the living room. Even when she couldn’t offer much, she would offer what she had. A stranger was never a stranger to Jamy for very long, and she loved to meet new friends and chat up old ones. She had a talent for talking on the phone, and thought call waiting was a brilliant invention. Jamy inherited her mother’s wit and love of life. She was always an active church member and lived as a dedicated Christian. Throughout her life she volunteered to help the poor, and later in life for survivors of human trafficking. As much as she walked in Jesus’ footsteps, she did have a knack for shoe shopping. Please talk to the family if you know anyone needing a size 9 woman’s shoe! She was the daughter of Robert and Ione Flinn, who preceded her in death. She was preceded in death by her sister Jody, and brother Jeff. She is survived by her daughter Mindy, and son in law Jeremy Flanagan and grand-daughters Meira and Elsa of Parkville, Missouri; her son Ryan of Truxton, Missouri; her son Tyler and daughter in law Carolyn Preul and grandchildren Audrey and Dylan of Columbia, Missouri; and son Wyatt and daughter in law Dusti Lyon Preul and grand-daughters Winona and Lydia of Parkville, Missouri. She is also survived by her sister Joyce, and brothers Bob (Nancy), Steve (Jill) and Sam (Linda) and their families, with numerous nephews, nieces and cousins. Family and friends will be received from 4:00 p.m. to 8:00 p.m. Wednesday, December 29, 2021 at KEMPER-KEIM Family Funeral Chapel located at 41 Farm Lane Hawk Point, MO 63349. Funeral services will be held at 11:00 a.m. on Thursday, December 30, 2021 at KEMPER-KEIM Family Funeral Chapel in Hawk Point, MO. Internment will be held at the Zion Methodist Cemetery in Truxton, MO. Expressions of sympathy may be made to Goodwill Industries International, Inc. in care of Kemper-Keim Family Funeral Chapel; P.O. Box 222 Troy, MO 63379. Arrangements are under the direction of Kemper- Keim Family Funeral Chapel; 41 Farm Lane Hawk Point, MO 63349. Online condolences may be made at www.kemperkeimfamilyfuneralchapel.com Phone 636-338-4375

Jamy Lena Preul, 68, of Columbia, Missouri, passed away on Sunday, December 26 at the University of Missouri Hospital in Columbia, Missouri. She was a loving mother and grandmother, a loyal sister and sister-in-law, and a teacher for hundreds... View Obituary & Service Information

The family of Jamy Lena Preul created this Life Tributes page to make it easy to share your memories.

Jamy Lena Preul, 68, of Columbia, Missouri, passed away on Sunday,...

Send flowers to the Preul family.