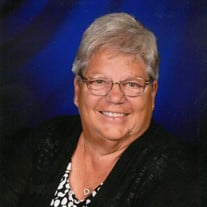 Jane Marie Eggering, 73, of Hawk Point, Missouri, having been fortified with the sacraments of the holy mother church passed away on Monday, January 28, 2019 surrounded by her family at her residence. She was born on November 6, 1945 in St.... View Obituary & Service Information

The family of Jane Marie Eggering created this Life Tributes page to make it easy to share your memories.

Jane Marie Eggering, 73, of Hawk Point, Missouri, having been...

Send flowers to the Eggering family.