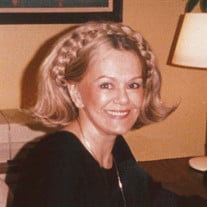 Janet Carolyn Hirsch-McManus, 85, of O’Fallon, Missouri, passed away on Friday, January 23, 2015 at Delmar Garden’s in O’Fallon. She was born May 24, 1929 in Washburn, Wisconsin, a daughter of the late Leif and Esther (Halvorsen) Hirsch. Janet graduated in 1947 from Ondossagon High School in Washburn, Wisconsin. She held several administrative positions throughout her career beginning as a bookkeeper for the Washburn Hospital and later as Coordinator for the Contact Lens Section of the American Optometric Association. Janet was creative and a woman of many talents which included music, interior and fashion design, and arts and crafts. She was an accomplished organist, had a beautiful singing voice, and enjoyed sharing these gifts with family and friends. As a young woman, she served the church as an organist and choir member and also played the organ for a local radio station. Janet enjoyed decorating her home, designing and sewing, and all types of fine needlework. She also had a passion for flowers and Gone With the Wind collectables. Janet was a strong and determined Christian woman with a deep abiding love and faith in the Lord. She was a loving mother and grandmother and a sincere, compassionate woman who always strove to live her life with dignity and integrity. Illness, dementia and Alzheimer's disease robbed Janet of her physical attributes and abilities, her memories, and many facets of her personality, but her legacy lives on in the hearts and minds of those who knew and loved her. She is survived by her daughter, Jana M. Dodge of O’Fallon; one granddaughter, Samantha N. Dodge of O’Fallon; one sister, Barbara Eckland of Minneapolis, and many nieces and nephews. She was preceded in death by her parents, husbands, Harold Guzzo M.D. and George McManus, Sr., and her four brothers, Russell Hirsch, Keith Hirsch, James Hirsch, and Richard Hirsch. A graveside memorial service will be held at a later date at the Woodlawn Cemetery in Washburn, Wisconsin. Expressions of sympathy may be made to the Alzheimer’s Association in care of Kemper-Millard-Keim Family Funeral Chapels; P. O. Box 222, Troy MO. Online condolences may be made at www.kempermillardkeimfamilychapels.com Ph.(636) 528-8221

The family of Janet Carolyn Hirsch-McManus created this Life Tributes page to make it easy to share your memories.

Send flowers to the Hirsch-McManus family.