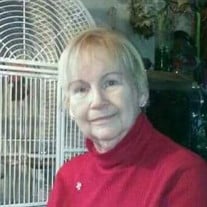 Janice Sue Walton, 71, of Silex, Missouri, passed away peacefully on Thursday, July 19, 2018 at her daughter’s residence in Silex, Missouri. She was born on April 23, 1947 in Alton, Illinois and the daughter of the late Marshal William “Bill” Henry and Oille Fay (Wise) Kitson. Janice was untied in marriage to Oscar Walton, Jr. on July 3rd, 1964 at the Old Alexandria United Methodist Church in Troy, MO and he proceeded her in death in 2013. Janice attended Buchanan High, met the man of her dreams and was later married. For many years she worked as a CNA at Rosedale Nursing Home in Silex and Parklane Care in Wentzville. While at Parklane she continued her education and was trained in Physical Therapy. Janice was one of few female Truck Driver’s working for KLLM Trucking and Crest Trucking. She worked as a custodian for Francis Howell School District for many years and recently a housekeeper at Silex Residential Home, LLC. Janice enjoyed collecting dolls, gardening, taking care of house plants and animal rescue. Janice was a member of the Ladies Auxiliary #9064 in Elsberry. She was a hard worker, who always found the time to spend with her family. She is survived by her two daughters and one son: Rhonda Walton-Westfall and husband Josh of Silex, MO, Jackie Smith of Moscow Mills, MO and Oscar Walton III and wife Melissa of Moscow Mills, MO; two brothers: Paul Kitson and wife Shirley of Winfield, MO and Lonnie Kitson of Moscow Mills, MO; one brother-in-law, John Trower of Winfield, MO; grandchildren: Samuel Whitchurch, Michael Summers, Jeffery Smith, Daniel Summers, Alex Smith, Taylor Smith, Alex Summers, Nadine Walton and Rosie Walton; great-grandchild, Paris Shelton; her four legged friend, Maggie; nieces, nephews, cousins and many friends, including: Tami Leverett, Katherine Bernhard and Marvadean Kimbrel. She was preceded in death by her parents, her husband, her siblings: Niomi LaRue, Carol Trower, and Cheryl Kitson; one brother-in-law and one sister-in-law: Victor LaRue and Nadine Kitson; two grandchildren: Matthew Smith and Daniel Smith and one niece and one nephew: Linda and Randy LaRue. A memorial service will be held at 12:00 p.m. on Saturday, July 28, 2018 at First Assembly of God located at 1154 Hwy E Silex, MO 63377. In lieu of flowers expressions of sympathy may be made to the Family of Janice Sue Walton, in care of KEMPER-MILLARD-KEIM Family Funeral Chapel; P.O. Box 222, Troy, MO 63379. Arrangements are under the direction of Kemper-Millard-Keim Family Funeral Chapel; 351 Monroe Street, Troy, Missouri 63379. Online condolences may be made at www.kempermillardkeimfamilyfuneralchapel.com Phone 636-528-8221

Janice Sue Walton, 71, of Silex, Missouri, passed away peacefully on Thursday, July 19, 2018 at her daughter&#8217;s residence in Silex, Missouri. She was born on April 23, 1947 in Alton, Illinois and the daughter of the late Marshal William... View Obituary & Service Information

The family of Janice Sue Walton created this Life Tributes page to make it easy to share your memories.

Send flowers to the Walton family.