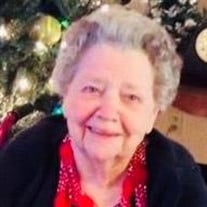 Jean Marie Webb, 93, of Chandler, Arizona, passed away peacefully surrounded by her family on January 14, 2019 at Sunrise Assisted Living in Chandler, Arizona. She was born on August 28, 1925 in Moscow Mills, Missouri and was the daughter of the late Amiel and Eva (Sarty) Weitkamp. Jean was united in marriage to Howard H. Webb on January 27, 1945, and he proceeded her in death in 2001. To this union two children were born. Jean enjoyed growing up in Moscow Mills with her younger sister Audrey, as a military wife she moved often. When Howard was on extended duty at sea, she was left to manage the household and raise her children. Jean gave birth to her son Jim in 1952 and her daughter Sharida the following year. In 1961 the family moved to Fremont, CA. There, Howard would retire from the Navy and transition to civilian life in the employ of Stanford University and Jean would begin her 20- year career at CSAA. In 1986 they retired and moved to their dream property in Grass Valley, CA. Jean was known for her outgoing personality. She was quick to laugh and did so often. She dabbled in ceramics, had a passion for fast cars and enjoyed going to the theater. A terrific cook she specialized in all types of comfort food. She loved her Bible study, chocolate and hosting her family for holidays in their idyllic Grass Valley setting. She was loved by all. She is survived by her caring son and daughter: Jim (Sharon) Webb of Phoenix, AZ, and Sharida Webb of Vallejo, CA; grandchildren: Adam (Kyle) Webb of Cave Creek, AZ, Justin (Becky) Cook of Tampa, FL and Brandon Cook of Beaverton, OR; and six great grandchildren. Jean was preceded death by her parents, her husband, Howard and sister, Audrey. A memorial service will be held at 12:00 P.M. on Monday, February 25, 2019 at KEMPER-MILLARD-KEIM Family Funeral Chapel located at 351 Monroe St. Troy, MO. Inurnment will be held at Anderson Hill/Friedens Cemetery in Moscow Mills, MO. In lieu of flowers expressions of sympathy may be made to Donors Choice in care of KEMPER-MILLARD-KEIM Family Funeral Chapel; P.O. Box 222, Troy, MO 63379. Online condolences may be made at www.kempermillardkeimfamilyfuneralchapel.com Ph.(636) 528-8221

Jean Marie Webb, 93, of Chandler, Arizona, passed away peacefully surrounded by her family on January 14, 2019 at Sunrise Assisted Living in Chandler, Arizona. She was born on August 28, 1925 in Moscow Mills, Missouri and was the daughter of... View Obituary & Service Information

The family of Jean Marie Webb created this Life Tributes page to make it easy to share your memories.

Send flowers to the Webb family.