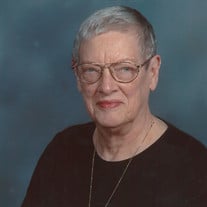 Jeane W. Duncan, 85, of Hawk Point, passed away peacefully on Tuesday, November 4, 2014 at the family farm in Hawk Point, Missouri. She was born on July 27, 1929 in St. Louis, Missouri and was the daughter of the late Edward Rutledge and Hester (Shields) Wilson. Jeane was united in marriage to William Robert “Bob” Duncan on September 11, 1948 at her parent’s residence in Troy, Missouri and he preceded her in death on February 25, 2003. Jeane graduated from Buchanan High in 1947 and continued her education at University of Missouri. After college she went to work as a medical secretary for 14 years and later became a bank teller at Citizen Savings and Loans in Mexico, Missouri. Bob and Jeane purchased the family farm in 1974 and she continued to oversee the farm even up to her final days. Jeane was a busy woman, who was always involved in community projects. She was an asset to her community and would go great distances to better the youth in her area. Jeane was instrumental in the Bread for Life Food Pantry and the Lincoln County Relay for Life for many years. She served as chairman for the Salvation Army and was a Girl Scouts Leader. Jeane received numerous awards throughout her lifetime, including Troy Chamber of Commerce Woman of the Year in 1985, Lincoln County Historical & Archeological Society Heritage Award on October 15, 1999, Hawk Point Chamber of Commerce Woman of the Year Award in 2009, Outstanding Service Award from the City of Hawk Point and Girl Scouts Thanks Badge. Jeane was a member of the Hawk Point Community Church, The First Christian Church, Troy Chamber of Commerce, Hawk Point Chamber of Commerce, Hawk Point Booster Club and past member of the Friends of Lincoln County Medical Center. With such a big heart and wanting to see her hometown grow, she saw the need for a civic center. In 2009 she purchased the previous Kemper-Marsh-Millard Funeral Home Building and donated it to the City of Hawk Point to serve as the Hawk Point Civic Center and Food Pantry. She also knew how important it was to have a safe helicopter landing pad available for the Hawk Point Community. In 2012, Duncan Farms was recognized as a Missouri Century Farm with the family farm dating back to 1890. When Jeane was not busy with her community events, she enjoyed going to the Mizzou Football Games, traveling and rooting on her #1 race car driver, Reid Millard. Jeane had a heart of gold and wanted what was best for her community. Jeane dedicated her life to improving and growing Hawk Point and Lincoln County. She is survived by her son, William “Bill” Duncan and wife, Liti of Mexico, MO; son-in-law, John Jorgensen, Sr. of Cincinnati, OH; four grandchildren, Daniel, Noah and Ruthie Duncan all of Mexico, MO and John Jorgensen, Jr. of Wisconsin and longtime family friend and farm manger, Buddy Cox of Hawk Point, MO; nieces, nephews, numerous relatives and many friends. She was preceded in death by her parents, her brother, Edward Wilson, her husband, William “Bob” Duncan and her daughter, Ruth Ann Jorgensen. A celebration of Jeane’s life will be held at 11:00 a.m. on Saturday, November 8, 2014 at KEMPER-MILLARD-KEIM Family Funeral Home/ Hawk Point Chapel, located at 41 Farm Lane Hawk Point, MO 63349. In lieu of flowers expressions of sympathy may be made to the Jeane Duncan Memorial Scholarship Fund. Arrangements under the direction of Kemper-Millard-Keim Family Funeral Chapel; P. O. Box 222, Troy MO. Online condolences may be made at www.kempermillardkeimfamilychapels.com Ph.(636) 338-4375

Jeane W. Duncan, 85, of Hawk Point, passed away peacefully on Tuesday, November 4, 2014 at the family farm in Hawk Point, Missouri. She was born on July 27, 1929 in St. Louis, Missouri and was the daughter of the late Edward Rutledge and Hester... View Obituary & Service Information

The family of Jeane W. Duncan created this Life Tributes page to make it easy to share your memories.

Jeane W. Duncan, 85, of Hawk Point, passed away peacefully on...

Send flowers to the Duncan family.