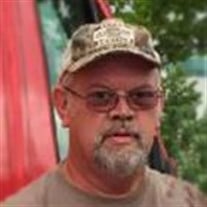 Jerald “Jerry” Lee Reeves, 50, of Moscow Mills, Missouri, passed away peacefully on Wednesday, October 3, 2018 at SSM Health St. Joseph Hospital Lake Saint Louis, Missouri. He was born on February 9, 1968 in Troy, Missouri and a son of the late Joseph Jerald and Joyce D. (Sanders) Reeves. He was united in marriage to the love of his life, Donna Renee Sullivan on April 4, 2009 in Moscow Mills, Missouri. Jerry was a 1986 graduate from Troy Buchanan High School. He was a forklift truck driver for 23 years with Bodine. Jerry was a member of the United Methodist Church in Moscow and the American Pool Association. He played on various Pool Leagues in Lincoln County and St. Charles County. Jerry liked fishing and deer hunting, with his naps in the woods. He enjoyed camping with his wife and family at the Cuivre River State Park. His family was his everything and he took great pride in helping raise his grandchildren. He is survived by his loving wife, Donna Renee Reeves in Moscow Mills, MO; his one son and three daughters: Kayla Massey of Old Monroe, MO, Edward Reeves and wife Caitlyn of Troy, MO, Brandy Massey of Moscow Mills, MO and Margaret “Marcy” Reeves of Troy, MO; one brother, Joe Reeves of TN; one aunt, Cathy Sanders; three uncles: Mike Sanders, Gary Sanders and Bob Ethington; seven grandchildren: Zachary, Chrissy, Zoey, Jason, Eli, Jeremy and Shiloh; brothers-in-law, sisters-in-law, nieces, nephews, cousins and friends. He was preceded in death by his parents and grandparents: Charles and Irene Sanders. Friends and family will be received from 1:00 p.m. to 5:00 p.m. on Saturday, October 6, 2018 at the KEMPER-MILLARD-KEIM Family Funeral Chapel located at 351 Monroe Street Troy, MO 63379. A funeral service will be held at 5:00 p.m. on Saturday, October 6, 2018 at the Troy Chapel. In lieu of flowers, expressions of sympathy may be made To The Family of Jerald “Jerry” Lee Reeves in care of Kemper-Millard-Keim Family Funeral Chapel, P.O. Box 222 Troy, MO 63379. Arrangements are under the direction of Kemper-Millard-Keim Family Funeral Chapel; 351 Monroe Street, Troy, Missouri 63379. Online condolences may be made at www.kempermillardkeimfamilyfuneralchapel.com Phone 636-528-8221.

The family of Jerald "Jerry" Lee Reeves created this Life Tributes page to make it easy to share your memories.

Send flowers to the Reeves family.