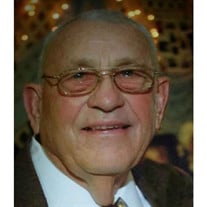 Jerome “Jerry” L. Zerrer, Sr., 79, of Troy, Missouri, Fortified with the Sacraments of the Holy Mother Church, carried the weight of the cross and laid his burden at the Lord’s feet at 12:54 p.m. on Friday, April 3, 2015 at St. Joseph Hospital West in Lake Saint Louis. Jerry was born on October 31, 1935, a son of the late William H. and Adele E. (Brown). Jerry graduated from DeAndreis High School in 1954. While attending high school, he met the love of his life, Mary Jane Winkelmann and married her on June 7, 1958 at St. Michaels Catholic Church. He entered the Army on September 5, 1958 earning a letter of appreciation a good conduct medal and was honorably discharged from the Army Reserves on September 4, 1964. Jerry worked at Union Market for many years and later retired after 30 years of service as an absentee replacement from General Motors, with Local # 2250. Most of his time was spent on the family farm, caring for the livestock, baling hay for customers or selling firewood. He was always going above what was expected from him. Jerry donated so much of his time and talent to many clubs and organizations over many years. He was very active as a member of Sacred Heart Catholic Church and The Knights of Columbus #6525. You would see Jerry working for the Knights of Columbus, delivering fish meals to shut ins, preparing the meals for the Special Olympic Dinner or the Tootsie Roll Drop. As a result of his dedication he was chosen Knight of the Month and his family was Family of the Month several times. He also was Friend of the Woman’s Auxiliary from the Knights. As a man of God with strong faith, he participated in his church by serving as Eucharistic Minister, Choir Member, Lector, Faithful Adoration Chapel Adorer, lead the Rosary on the 5th Sunday of every month, was a member of the prison ministry team, St. Vincent de Paul Society, keeper of the key for the church marquee and kept it updated. On every Good Friday, for the last fifteen years, he carried the cross through the streets of Troy for The Way of The Cross Procession. He served many years with the Picnic Committee and was past chairman. Jerry served in the Wheat Room as Table Leader for Residents Encounter Christ and was a weekend director. He served on many teams within the Quincy Cursillo, with original Cursillo #132 on September of 1994 and was Rector for Cursillo #297 on September of 2013. His heart was in helping the youth within his community. He was a supporter of the local 4-H Clubs, FFA Chapters and was a member of the Lincoln County Fair Board for 40 years. During his 40 years, he entered numerous cars in the demolition derby, was one of the builders of the demolition derby pits and the Lois Marsh Memorial Garden. Jerry was never at an idle, he was always putting his family first. You would see him supporting his children and grandchildren in their various activities. He was one of the participants to establish the youth soccer programs in Lincoln County and later the Lady Trojan Soccer at Troy Buchanan High School. Jerry’s hobbies were spending time with his high school sweetheart, fishing, as well as deer and turkey hunting. His hard work and dedication to the community will be greatly missed, but as Mary says, “God took a good man on Good Friday.” He is survived by his loving wife of 56 years, 9 months and 27 days, Mary Zerrer of Troy; children, Jerry Zerrer (Fawn Knoll), Jr. of Hawk Point, John Zerrer, Sr. (Brenda) of Elsberry, Bill Zerrer (Glenna) of Elsberry, Bob Zerrer of Clarksville, Mary Jane Zerrer Marre (Frank Joseph Marre III) of Elsberry, Tom Zerrer (Tonya) of Louiseville, Ted Zerrer (Sara) of Troy, Katy Schormann (Craig) of Troy and Clemmy Zerrer of Troy; grandchildren, Amber Stanek (Matt), Chelsea Zerrer (Rachel Kraft), Karlea Zerrer, Casey Thompson (Rebecca), Tim Fry (Laura), Jon Webb, James (Zerrer) Webb, Travis Webb, Samantha and Tanner Marre, Ryan and Leah Zerrer, Allie Traw (William), Zachery Moore, Ashley McWhinnie (Eric), Heather Zerrer, Erika Zerrer, Jimmy Rhoades (Page), Matthew Rhoades, Mindy Rhoades, Amanda Zerrer, Branden Zerrer, Jersey and Parker Zerrer, DJ and Stevie Schormann and Cole Zerrer; great-grandchildren, Bryson and Talon Stanek, Duane Thompson, William and Tori Brandes, Danitta Henson, Kobe, Kinley and Kami Fry, Hailey and Harper Traw, Ryley Moore and Addy and Bella Rhoades; siblings, David Zerrer, Rita Trueb and Lois Zerrer; sisters and brothers-in-law, nieces, nephews, cousins, numerous relatives and many friends. He was preceded in death by his parents, two sons, Joseph Zerrer and James Zerrer, one grandson, John “Johnny” Zerrer, Jr., one daughter-in-law, Lisa Zerrer, two brothers, Ronald J. and William Zerrer, brother-in-law, Edmund Winkelmann, sisters-in-law, Peggy Winkelmann and Bette Zerrer and father-in-law and mother-in-law, Otto F. and Eleanor Winkelmann. Friends will be received from 2:00 p.m. to 8:00 p.m. on Tuesday, April 7, 2015 at the Knights of Columbus Hall located at 500 Hwy J Troy, MO 63379. Prayer service will be held at 4:00 p.m. Funeral mass will be held at 10:00 a.m. on Wednesday, April 8, 2015 at Sacred Heart Catholic Church located at 100 Thompson Drive Troy, MO 63379. Officiating the mass will be Father Tom Wissler. Interment will be held at the Sacred Heart Catholic Cemetery in Troy. Serving as pallbearers will be: Jerry Zerrer, Jr., James “Bunt” Matthews, John Zerrer, James (Zerrer) Webb, Bill Zerrer, Bob Zerrer, Tom Zerrer and Ted Zerrer. Honorary pallbearers will be: Mike Miller– REC, Bob Krankel– Church, Frankie Teasley- Neighbors, Larry Kohenskey– GM Retiree, Randy Leitman– Knights of Columbus , Ron Edinger– St. Vincent de Paul Society, Tim Fry– Armed Services and John Boland– Quincy Cursillo. It was Jerry’s request that in lieu of flowers, a gift of an unwrapped toy be given to the family, so they may donate it in his memory. Arrangements are under the direction of KEMPER-MILLARD-KEIM FAMILY FUNERAL CHAPELS, P.O. Box 222 Troy, MO 63379. Online condolences may be made at www.kempermillardkeimfamilychapels.com Ph. (636) 528-8221

The family of Jerome "Jerry" L. Zerrer Sr. created this Life Tributes page to make it easy to share your memories.

Send flowers to the Zerrer family.