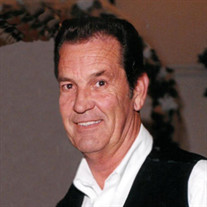 Jerry Ray Presser, 74, of Troy, Missouri, passed away on Monday, November 2, 2020 at his residence in Troy, Missouri. Jerry was born on August 11, 1946 in Tuckerman, Arkansas, a son of the late Jess and Jeffie (Simms) Presser. He was united in marriage to Joyce Mitten-Wuelling on April 20, 1985 at the New Galilee Christian Church in Troy, Missouri. Jerry owned and operated J and J Trucking for many years. He was a member of the 50’s and 60’s Club of Troy and Drag Racing of Mid America Raceway. In his earlier years he enjoyed dancing with his wife Joyce. He volunteered many hours at the Lincoln County Fair Grounds. Jerry enjoyed the water, boating and especially anywhere he could throw his pole out to fish. He would spend several hours at the lock and dam watching the boats. He loved the memories he made camping with friends and family. When Jerry was home he spent his time tinkering in his shop or sitting on the porch watching the wildlife. He enjoyed the time he spent with his family, especially his grandchildren, great-grandchildren and Joyce. Jerry is survived by his loving wife, Joyce Presser of Troy, MO; one daughter and two sons: Sherry Presser of Troy, Steven Wuelling (Mikki) of Warrenton, MO and Michael Wuelling (Dawn) of Versailles, MO; one brother, Eddie Presser of Searcy,AR; nine grandchildren: Amber, Erin, Jeffrey, Alex, Taylor, Karlee, Kortni, Wyatt and Kody; three great-grandchildren: Cale, Bryson and Charily Mae; nieces, nephews, cousins and friends. He was preceded in death by his parents, one son, Jeff Presser, two grandchildren: Daniel and Mathew, two sisters: Sarah Presser and Ruth Haynes and three brothers: Jack, Bob and Man. Services will be held at a later date. Expressions of sympathy may be made to Mercy Hospice in care of Kemper-Millard-Keim Family Funeral Chapel P.O. Box 222 Troy, MO 63379. Arrangements are under the direction of Kemper-Millard-Keim Family Funeral Chapel; 351 Monroe Street, Troy, Missouri 63379. Online condolences may be made at www.kempermillardkeimfamilyfuneralchapel.com Phone 636-528-8221

Jerry Ray Presser, 74, of Troy, Missouri, passed away on Monday, November 2, 2020 at his residence in Troy, Missouri. Jerry was born on August 11, 1946 in Tuckerman, Arkansas, a son of the late Jess and Jeffie (Simms) Presser. He was united... View Obituary & Service Information

The family of Jerry Ray Presser created this Life Tributes page to make it easy to share your memories.

Jerry Ray Presser, 74, of Troy, Missouri, passed away on Monday,...

Send flowers to the Presser family.