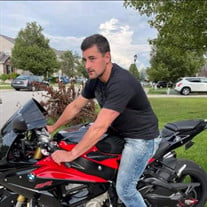 Jesse Lee Perkins, 28 of O’Fallon, Missouri, formerly Silex, Missouri, passed away on Sunday, August 1, 2021 in St. Charles, Missouri. He was born on September 23, 1992 in Cape Fear, North Carolina, a son of Karl Douglas and Sandra Lee Perkins. Jesse graduated from Silex High School in 2011 and continued his education at Pike Lincoln Technical College and later Linn State Tech College in 2013. He was recently employed as a Paint Tech for J &T Auto Collison Repair in St. Ann, MO and previously, Carstar Parmentier in Bridgeton, MO, Plaza Motor Collison Center and started his career at F&S Collision Repair Center in Troy, MO. Jesse lived his life to the fullest, hanging out with his brothers and friends. He enjoyed floating on the river and loved his motorcycles. Jesse had a heart of gold and an infectious smile that could light up a room. He never knew a stranger and was always willing to give the shirt off his back. Often times friends became family and that bond will be missed. He is survived by his mother and father: Sandra and Karl Perkins of Silex, MO; four brothers: Tyler Perkins, Nicholas Perkins, Wesley Perkins and Joseph Perkins all of Silex, MO; paternal grandmother, Patsy Perkins of O’Fallon, MO; several aunts, uncles, cousins and many friends that became family. He was preceded in death by his paternal grandfather, Melvin Perkins, maternal grandparents, Robert, Sr. and Sarah Allinger. Family and friends will be received from 1:00 p.m. to 8:00 p.m. on Friday, August 6, 2021 a KEMPER-KEIM Family Funeral Chapel located at 351 Monroe Street Troy, MO 63379. Funeral service to be held at 11:00 a.m. on Saturday, August 7, 2021 at KEMPER-KEIM Family Funeral Chapel in Troy, MO. Internment will be held at Millcreek Cemetery. Serving as pallbearers are, Tyler Perkins, Joseph Perkins, Wesley Perkins, Nicholas Perkins, Josh Hanten, Josh Wotring, Justin Wotring and Alan Bowen. Expressions of sympathy may be made to The family of Jesse Lee Perkins, in care of Kemper-Keim Family Funeral Chapel P.O. Box 222 Troy, MO 63379. Arrangements are under the direction of Kemper-Keim Family Funeral Chapel; 351 Monroe Street, Troy, Missouri 63379. Online condolences may be made at www.kemperkeimfamilyfuneralchapel.com Phone 636-528-8221

The family of Jesse Lee Perkins created this Life Tributes page to make it easy to share your memories.

Send flowers to the Perkins family.