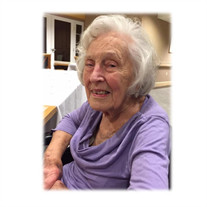 Joann Throgmorton (nee Helena Joann Bormann) passed away peacefully following a short illness on Wednesday, September 14, 2016, surrounded by her family. Joann was born July 27, 1932, to August Carl and Helen Christina (Kuhlmann) Bormann on the Bormann Family Farm in Metropolis, Illinois. The oldest of six children, she and her siblings spent their youth in rural Massac County, Illinois. In November of 1952, Joann married John Truman Throgmorton at the Upper Salem Church and to them were born three children: Carla Ann, John Russell and Kyle August. Early on, Joann taught elementary education and then later, in the early 1970s, she founded CarJo Ceramics, which remained open until 2015. Joann was always up for an adventure; she enjoyed traveling and she never met a stranger. She was an avid card player (especially rummy and pinochle). Joann is survived by her 3 children: Carla (Steve) Emert, John (Melissa) Throgmorton, and Kyle (Joyce) Throgmorton, 7 grandchildren and 2 great grandchildren. In addition, she is survived by her 4 sisters: Gwen, Yvonne, Carol and Karen, sister in law Sue, numerous nieces and nephews, her aunt Martha, many cousins and special friends. Her parents, Carl and Helen Bormann and her brother Carl Kenneth Bormann preceded her in death. Her family kindly requests, in memory of Joann, that you “pay forward” a good deed. Send flowers to a loved one. Volunteer your time at a school, senior center, food bank or animal shelter. Adopt a rescue pet. Be kind and charitable in your words and actions. The family invites everyone to celebrate Joann’s life, from 1:00 p.m. to 4:00 p.m. on Sunday, September 25, 2016 at the Woods Fort Golf Course and Restaurant located at 1 Country Drive Troy, MO 63379. A graveside service will be held at 2:00 p.m. on Sunday, November 6, 2016 at the Massac Memorial Gardens in Metropolis, IL. Arrangements are under the direction of Kemper-Millard-Keim Family Funeral Chapel; 351 Monroe Street, Troy, Missouri 63379. Online condolences may be made at www.kempermillardkeimfamilyfuneralchapel.com Phone 636-528-8221

The family of Joann Throgmorton created this Life Tributes page to make it easy to share your memories.

Send flowers to the Throgmorton family.