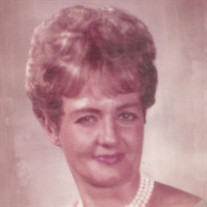 Joanna “Jo” Welsch, 81, of Troy, Missouri, passed away on Monday, February 1, 2016 at her residence. She was born on May 22, 1934 in St. Louis, Missouri a daughter of the late Ed and May (Davis) Johnson. Jo graduated high school and worked various jobs, including McDonnel Douglas and Sioux City & New Orleans Barge Line. While working at McDonnell Douglas in 2000, she met the love of her life Richard, and shortly after she moved to Troy to start the next chapter of their life together. They purchased an RV and started traveling, every winter they would migrate south frequently visiting Florida, Texas, Arizona and Mexico. Jo was a member of the Travel Club and McDonnell Douglas Camping Club. She enjoyed reading and the time she spent with her family and close friends. She is survived by her significant other, Richard Wulfert of Troy; son, Ronnie Welsch and wife Sophie of Fort Worth, TX; one sister, Doloris Smith of Ferguson; step-children: Joyce Derby and husband Dennis of Dardenne Pairie, Barbara and husband Andy of Lake of the Ozarks and Sharon of Troy; one brother-in-law, Butch Wulfert and wife Edna of Troy; three grandchildren, five step-grandchildren, several great-grandchildren, nieces, nephews, cousins and two four-legged friends: Abby and Penny. She was preceded in death by her parents, son, George Welsch, daughter, Sandy Statler and brother-in-law, LeRoy Smith. Friends will be received from 11:00 a.m. to 1:00 p.m. on Friday, February 5, 2016 at the KEMPER-MILLARD-KEIM FAMILY FUNERAL HOME/TROY CHAPEL located at 351 Monroe Street Troy, MO 63379. Funeral service will be held at 1:00 p.m. at the Chapel. Interment will be held at the Troy City Cemetery. Expressions of sympathy may be made to the Family of Joanna “Jo” Welsch, in care of Kemper-Millard-Keim Family Funeral Chapels, P.O. Box 222 Troy, MO 63379. Online condolences may be made at www.kempermillardkeimfamilychapels.com Phone 636-528-8221

The family of Joanna "Jo" Welsch created this Life Tributes page to make it easy to share your memories.

Send flowers to the Welsch family.