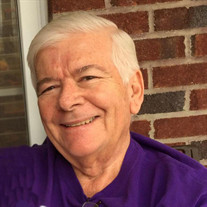 John Raymond Bogart, Jr. 71, of Hawk Point, Missouri, passed away on Thursday, June 13, 2019 at his residence. He was born on August 15, 1947 in California, Missouri and the son of the late John Raymond and Mary Vina (Garrison) Bogart. He was united in marriage to Patricia Bowers on January 24, 1969 at the Court House in Kansas City, Kansas and to this union two daughters and one son were born. John graduated from Wyandotte High School in 1965 and earned his associate’s degree in Accounting. He served his country in the United States Navy from 1965 until he was honorably discharged in 1971. John started his career with Kansas Gas Service as a meter reader and worked his way up with 30 years of dedications. He then worked for Lake Lotawana Association as an administrator and retired. In his earlier years he was very active in his children’s lives, president of various committees, treasurer of Boy Scouts. He earned various bowling awards. John was the President of the Family Council of Arbors Memory Care and played a vital role with the Lincoln County Walk to end Alzheimer’s. He visited various American Legion Posts within the area. Patricia and John had many wonderful years together and an undying love for one another. John spent the majority of his time rooting on their grandchildren at their softball games, baseball games and gymnastics meets. He is survived by his loving wife of 50 years, Patricia Bogart of Troy, MO; two daughters and one son: Shawn Bargen (Greg) of Moscow Mills, MO, David Bogart (Genia) of West Des Moines, IA and Shannon Mayhugh (Dwight) of Overland Park, KS; one sister, Sherrie Margolin of Shawnee Mission, KS; grandchildren: Alexander Bargen, Austin Bargen, Dylan Bogart, Sydney Bogart, Faith Mayhugh, Sophia Mayhugh and Annabel Bogart; nieces, nephews and friends. He was preceded in death by his mother and father and one sister, Dixie Graves. Family and friends will be received from 3:30 p.m. to 5:00 p.m. on Thursday, June 20, 2019 at the KEMPER-MILLARD-KEIM Family Funeral Chapel located at 351 Monroe Street Troy, MO 63379. A celebration of life will be held at 5:00 p.m. on Thursday, June 20, 2019 at KEMPER-MILLARD-KEIM Family Funeral Chapel located at 351 Monroe Street Troy, MO 63379. In lieu of flowers, expressions of sympathy may be made to Alzheimer’s Association in care of Kemper-Millard-Keim Family Funeral Chapel, P.O. Box 222 Troy, MO 63379. Arrangements are under the direction of Kemper-Millard-Keim Family Funeral Chapel; 41 Farm Lane Hawk Point, MO 63349. Online condolences may be made at www.kempermillardkeimfamilyfuneralchapel.com Phone 636-338-4375.

John Raymond Bogart, Jr. 71, of Hawk Point, Missouri, passed away on Thursday, June 13, 2019 at his residence. He was born on August 15, 1947 in California, Missouri and the son of the late John Raymond and Mary Vina (Garrison) Bogart. He was... View Obituary & Service Information

The family of John Raymond Bogart Jr. created this Life Tributes page to make it easy to share your memories.

Send flowers to the Bogart family.