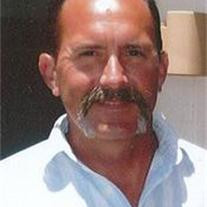 John Edward Dahmer, 49, of Hawk Point passed away on Friday, June 7, 2013 at his residence. He was born October 2, 1963 in St. Louis, Missouri, a son of Terry Sieland and Judy Gutzman. He was united in marriage to Nancy Schubert on April 4, 1992 at the St. Charles Presbyterian Church. To this union one son was born. John graduated from Aquinas High School in 1982 and continued his education at Rankin Technical College as a Machinist. He was employed for 20 years at St. Louis Metalizing and then Tech Manufacturing in Wright City, Missouri. Nancy and John met through mutual friends, they knew after two weeks of dating they wanted to spend the rest of their lives together and they were blessed with a son, Tyler on July 17, 1993. John loved to deer hunt with his son and fishing at the Lake of the Ozarks with his dad. He enjoyed four wheeling and spending time with his family and friends. John was a fun, loving caring man, who never knew a stranger and had a great sense of humor. His family always came first in his life and he will be deeply missed. He is survived by his loving wife of 21 years, Nancy Dahmer of Hawk Point, Missouri; one son, Tyler Dahmer of Hawk Point, Missouri; father Terry Sieland (Sabra) of Camdenton, Missouri: mother, Judy Lewis of Leslie, Missouri; one sister, Jean Dillingham (Tim) of O’Fallon, Missouri; mother and father-in-law, Thomas and Dorothy Schubert of St. Charles, Missouri; brother-in-law, Jon Schubert of Foristell, Missouri, aunts, uncles, nieces, nephews and many friends. He was preceded in death by his grandparents and his adopted parents, Donald and Dorothy Dahmer. Friends will be received from 4:00 p.m. to 8:00 p.m. on Wednesday, June 12, 2013 at KEMPER-MARSH-MILLARD Family Funeral Home / Hawk Point Chapel (41 Farm Lane Hawk Point, Missouri 63349). Funeral services will be held at 11:00 a.m. on Thursday, June 13, 2013 at the Chapel. Interment will be held at Hawk Point City Cemetery. Expressions of sympathy may be made to the Hawk Point VFW Post # 7560. Arrangements are under the direction of Kemper-Marsh-Millard Family Funeral Chapel; P. O. Box 222, Troy MO. Online condolences may be made at www.kempermarshmillardfamilychapels.com Ph.(636) 528-8221

John Edward Dahmer, 49, of Hawk Point passed away on Friday, June 7, 2013 at his residence. He was born October 2, 1963 in St. Louis, Missouri, a son of Terry Sieland and Judy Gutzman. He was united in marriage to Nancy Schubert on April 4,... View Obituary & Service Information

The family of John Dahmer created this Life Tributes page to make it easy to share your memories.

John Edward Dahmer, 49, of Hawk Point passed away on Friday,...

Send flowers to the Dahmer family.