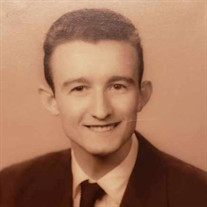 John E. Mirgaux, 85, of Troy, Missouri, passed away on Thursday, March 11, 2021 at SSM St. Joseph Hospital West in Lake Saint Louis, Missouri. He was born on October 23, 1935 in Ill-Mo, Missouri a son of the late John F. and Stella (Petitt) Mirguax. John was united in marriage to Eleanor Krizek on October 21, 1969 in St. Louis, Missouri. John graduated from McKinley High School in 1953 and continued his education at a trade school for heating and refrigeration. He served his country in the United States Army from August 1, 1957 to July 31, 1959, then the active reserves from August 1, 1961 to July 31, 1963 and was honorably discharged. He retired as a Steam Fitter for the Board of Education in St. Louis. John was a member of the Masonic Lodge #95 A.F. & A.M. for over 30 years. He earned his 1st degree black belt in Jezuit and Cobra Windham. John was a licensed scuba diver. He enjoyed fishing and hunting, especially deer, squirrel and dove. He liked the outdoors and was always feeding the birds. John had a great sense of humor and a smile on his face. He is survived by his loving wife, Eleanor Mirgaux of Hawk Point, MO; one daughter, Christine Wood and husband Jeff of Woodburn, KY; bonus children: Clifford Wachter and wife Michelle of High Ridge, MO and Frank Wachter and wife Liz of Dayton, OH; seven grandchildren: Jeffery Wood (Jessica), Brandon Wood, Brandi Watcher, Jamie Watcher, Tina Watcher, and Amy Mirgaux; several great-grandchildren; nieces, nephews cousins and many friends. He was preceded in death by his parents, one son, Gregory Mirgaux; two bonus sons: LeRoy Miller and Donald Wachter; one brother, Harvey D. Mirgaux and one sister, Helen L. Ledbetter. Family and friends will be received from 10:00 a.m. to 12:00 p.m. on Monday, March 15, 2021 at KEMPER-KEIM Family Funeral Chapel located at 41 Farm Lane Hawk Point, MO 63349. Funeral mass will be held at 12:30 p.m. Monday, March 15, 2021 at St. Mary’s Catholic Church located at 458 Main Street Hawk Point, MO 63349. Interment will be held at the St. Mary’s Catholic Cemetery in Hawk Point, MO. Expressions of sympathy may be made to American Cancer Society in care of Kemper- Keim Family Funeral Chapel P.O. Box 222 Troy, MO 63379. Arrangements are under the direction of Kemper- Keim Family Funeral Chapel; 41 Farm Lane Hawk Point, MO 63349. Online condolences may be made at www.kemperkeimfamilyfuneralchapel.com Phone 636-338-4375

The family of John E. Mirgaux created this Life Tributes page to make it easy to share your memories.

Send flowers to the Mirgaux family.