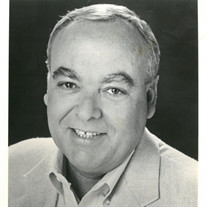 Johnny Mac Larrabee “John Larrabee”, 73, of Moscow Mills, Missouri, passed away on Saturday, July 10, 2021 at his residence in Moscow Mills, Missouri. He was born on May 15, 1948 in Oxnard, California, son of James D. Larrabee III and Oleta (McCabe) Larrabee. Johnny graduated from Camarillo High School in 1966 and continued his education at Columbia Broadcasting. He had a true love for broadcasting. Johnny began his career in Oxnard, CA at KUDU radio, moving onto Bakersfield, Salt Lake City, Chattanooga, New York and then St. Louis which he said were the best years of his career and his life. His main gig was afternoon drive host on KYKY Y98 FM DJ “Cartunes” for your ride home. He hosted the show for 28 years and 5 years with his sidekick, Julie Buck. He was a very successful FM DJ on highly ranked CBS/ top 40 station. Later in his career, he was a pilot for the AM drive on KMOX. Johnny retired after 28 years of service to the broadcasting industry. He was an avid pilot and motorcycle enthusiast. Participating in many Sturgis Motorcycle Rally trips to Deadwood, SD. Often times he would fly to Sturgis, with his motorcycle and while visiting, he would offer plane rides to others. Johnny was known for providing champagne flights in St. Louis for newlywed couples or romantic proposals. Johnny was President of the Junior Chamber of Commerce and President of Birthday Place Chapter of Jaycees for the St. Louis Junior Chamber of Commerce. He was the chairman of 4 air shows in St. Louis, MO. Johnny was the founding chairman of the Teddy Bear Express, the program distributed teddy bears to 7 Children’s Hospitals during Christmas. The project received first place in the US National Child Assistance project and third place in the world. Johnny was honored to receive the JCI Senatorship, most prestigious award to be received in the Jaycees International. He is survived by his one sister, Jeanie Marie Gibson and husband Michael of Plano, TX; nieces and nephews: Shannon Pineda of Camarillo, CA, Laura McCarter of Moorpark CA, Cynthia McManus and husband Rob of Charlotte, NC and James D. Larrabee V of Bull Head City, AZ; great-nieces and great nephews: Amanda Pineda, Robert Paul Markus, James Paul Markus, Matthew Markus, Andrew Lonie, Michael McCarter and Reagan Larrabee and many, many friends. He was preceded in death by his parents, James and Oleta Larrabee and one brother, James D. Larrabee IV. Family and friends will be received from 12:00 p.m. to 2:00 p.m. on Saturday, July 31, 2021 at KEMPER-KEIM Family Funeral Chapel located at 351 Monroe Street Troy, MO 63379. Celebration of life will be held at 2:00 p.m. at the Troy Chapel. In lieu of flowers expressions of sympathy may be made to COPD Foundation in care of Kemper-Keim Family Funeral Chapel P.O. Box 222 Troy, MO 63379. Arrangements are under the direction of Kemper-Keim Family Funeral Chapel; 351 Monroe Street, Troy, Missouri 63379. Online condolences may be made at www.kemperkeimfamilyfuneralchapel.com Phone 636-528-8221

The family of Johnny Mac Larrabee created this Life Tributes page to make it easy to share your memories.

Send flowers to the Larrabee family.