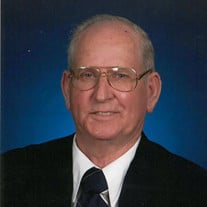 Joseph William Garriott, 84 of Troy, Missouri, passed away on Sunday, June 24, 2018 at his daughter’s residence in Warrenton, Missouri. He was born on September 25, 1933 in Rock Island, Illinois and the son of Grover C. and Faye (Harvey) Johnson. Joseph was united in marriage to the love of his life, Florence Albright, on August 29, 1959 in Piggott, Arkansas, to this union four children were born and Florence preceded him in death on December 25, 2017. Joseph attended school in Rock Island, IL, at the age of 18 he enlisted in the United States Army during the Korean War and was honorably discharged. Joseph moved to Silex, Missouri after serving his country and then married the love of his life Florence. He worked for McDonnel Douglas which is now known as Boeing and retired after many years of hard work and dedications. After retirement he spent most of his time traveling across the United States with his wife and grandchildren. Joseph was a member of the First Assembly of God in Troy and was an active member of the Silver Saints. He is survived by his four daughters: Nancy Jo Richardson and husband Tom of Santa Fe, MO, Connie McDonald and husband Steve of Silex, MO, Barbara Williams and husband Tim of Warrenton, MO and Dorothy Derr and husband Mark of Troy, MO; one brother, Robert Weir of Warrenton, MO; two brothers-in-law and three sisters-in-law: Roy Albright and wife Anita of St. Louis, MO, Warren Albright and wife Charlotte of Troy, MO, Luella Janosa and husband Frank of Virginia. Dorothy Boucher of Troy, MO and Betty Bauer and husband Steve of St. Charles; grandchildren: Christina Derr, Sara Derr, Stephanie Crowe, Caryn Yeager, Ashley Hite and Craig Richardson; twelve great-grandchildren and another on the way, nieces, nephews, cousins, friends and his four legged friend, Missy. He was preceded in death by his parents, one brother-in-law, Eddie Albright and one granddaughter, Dawn McDonald. Friends will be received from 4:00 p.m. to 8:00 p.m. on Thursday, June 28, 2018 at KEMPER-MILLARD-KEIM Family Funeral Chapel located at 351 Monroe Street Troy, MO 63379. A funeral service will be held at 11:00 a.m. on Friday, June 29, 2018 at the KEMPER-MILLARD-KEIM Family Funeral Chapel in Troy, MO. Interment will be held at the Old Alexandria Cemetery in Troy, MO. In lieu of flowers expressions of sympathy may be made to the Pets Alone Sanctuary in care of KEMPER-MILLARD-KEIM Family Funeral Chapel, P.O. Box 222 Troy, MO 63379. Arrangements are under the direction of Kemper-Millard-Keim Family Funeral Chapel; 351 Monroe Street, Troy, Missouri 63379. Online condolences may be made at www.kempermillardkeimfamilyfuneralchapel.com Phone 636-528-8221

Joseph William Garriott, 84 of Troy, Missouri, passed away on Sunday, June 24, 2018 at his daughter&#8217;s residence in Warrenton, Missouri. He was born on September 25, 1933 in Rock Island, Illinois and the son of Grover C. and Faye (Harvey)... View Obituary & Service Information

The family of Joseph William Garriott created this Life Tributes page to make it easy to share your memories.

Joseph William Garriott, 84 of Troy, Missouri, passed away on...

Send flowers to the Garriott family.