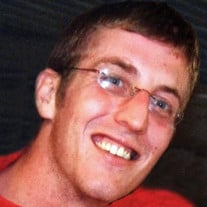 Joseph “Joe” Robert Brodt, 35, of Troy, Missouri passed away on Tuesday, October 28, 2014 at St. Joseph Hospital West in Lake Saint Louis, Missouri. He was born on September 17, 1979 in Philadelphia, Pennsylvania, a son of Robert “Bob” Brodt and Sheila Hopkins. Joe grew up and spent most of his life in Troy. In his earlier years he played Khoury league baseball and attended Troy Buchanan High School. He enjoyed fishing, playing catch with his son and spending time with his family. Joe worked for his father at B & B Electric for over 15 years. He had a good heart and he was happy with what he had in life. Joe normally always had a smile on his face and he loved all of those who loved him. His memory will forever live on and he will be missed every day. But he is now reunited with his brother, Mike and we can only imagine the reunion they are having, how beautiful it must be! He is survived by his son, Michael Joseph Brodt of Troy, MO; his parents, Bob Brodt and wife, Vicki Mennemeyer of Troy, MO, Sheila Wagner of St. Charles, MO and Debbie Thurmon of Troy, MO; one sister, Rachel Dunard and husband, Jason of Troy, MO; Jenny D’Olympia and husband, Morgan of Canton, MA;two half-brothers, Joshua Watkins and Matthew Thalhammer; paternal grandparents, Robert and Bertha Brodt of Odessa, FL; maternal grandmother, Carol Galloway and husband, John of Curryville, MO; nieces and nephew, Lilly, Ally and William Dunard; his wife, Natasha, aunts, uncles, numerous relatives and many friends. He was preceded in death by his brother, Michael “Mike” Jason Brodt, his maternal grandfather, Donald Hopkins and his uncle, David Brodt. Services will be held private for the family. Officiating the service will be Pastor Dennis Carver. Interment will be held at Troy City Cemetery. In lieu of flowers expressions of sympathy may be made to The Family Of Joe Brodt (for his son Michael’s educational fund) in care of Kemper-Millard-Keim Family Funeral Chapel; P.O. Box 222, Troy, MO 63379. Online condolences may be made at www.kempermillardkeimfamilychapels.com Ph.(636) 528-8221

The family of Joseph "Joe" Robert Brodt created this Life Tributes page to make it easy to share your memories.

Send flowers to the Brodt family.