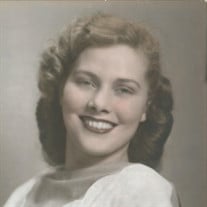 Joyce Virginia (Moore) Stuck, 85, of Troy, Missouri passed away peacefully on Wednesday, January 25, 2017 in Troy, Missouri. She was born on March 14, 1931 in Moberly, Missouri, a daughter of the late Samuel and Opal (Moxley) Moore. She was united in marriage to Leonard Stuck on May 31, 1947 and he preceded her in death on August 22, 2011. To this union one son and two daughters were born. She was educated through the Moberly School District. Joyce and Leonard moved to St. Louis from Moberly and started their family. In 1956 they decided to call Hawk Point, Missouri, home. They followed their dreams of owning a farm and in 1957 they founded Stuck Construction. She was a member of the Hawk Point Baptist Church. Joyce enjoyed reading, sewing, gardening and canning the fresh produce. You always knew were you stood with Joyce and she welcomed you with open arms. She is survived by her one son and one daughter: Steven Stuck of Troy, Missouri and Karen Stuck of Washington, Missouri; two grandchildren: Anthony Konys of Washington, Missouri and Lenetta Konys of Washington, Missouri; two great-grandchildren: Dylann Konys and Samuel Kuhlmann; one brother, Samuel Moore of Hawk Point, MO; brothers-in-law, sisters-in-law, nieces, nephews, great-nieces, great-nephews and many friends. She was preceded in death by her parents, her husband, one daughter, Theresa Ann Stuck, four sisters, one brother, sisters-in-law and brothers-in-law. Friends will be received from 4:00 p.m. to 8:00 p.m. on Friday, February 3, 2017 at KEMPER-MILLARD-KEIM Family Funeral Chapel located at 41 Farm Lane Hawk Point MO 63349. An additional visitation will be held from 9:00 a.m. to 11:00 a.m. on Saturday, February 4, 2017, with the funeral service to follow at 11:00 a.m. at the KEMPER-MILLARD-KEIM Family Funeral Chapel in Hawk Point. Officiating the service will be Reverend James Huffman. Interment will be held at the Hawk Point City Cemetery. Expressions of sympathy may be made to American Lung Association or Alzheimer’s Research in care of Kemper-Millard-Keim Family Funeral Chapel, P.O. Box 222 Troy, MO 63379. Arrangements are under the direction of KEMPER-MILLARD-KEIM Family Funeral Chapel; 41 Farm Lane Hawk Point, MO 63349. Online condolences may be made at www.kempermillardkeimfamilyfuneralchapel.com Phone 636-338-4375

Joyce Virginia (Moore) Stuck, 85, of Troy, Missouri passed away peacefully on Wednesday, January 25, 2017 in Troy, Missouri. She was born on March 14, 1931 in Moberly, Missouri, a daughter of the late Samuel and Opal (Moxley) Moore. She was... View Obituary & Service Information

The family of Joyce Virginia Stuck created this Life Tributes page to make it easy to share your memories.

Send flowers to the Stuck family.