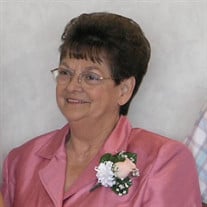 Judith Leroy Shearrer, 78, of Troy, Missouri, passed away on Saturday, May 16, 2020 at SSM St. Joseph Hospital West in Lake Saint Louis, Missouri. She was born on September 11, 1941 in St. Louis, Missouri was daughter of the late Wilson Tutwiler and Rachel Adeline (Diamond) Parker. Judith was united in marriage to Bobby Shearrer on December 14, 1963 and to this union one daughter and one son were born. Judy attended the Soldan High School. Early in life she was a trained as a butcher by her father. She worked in that trade from time to time early in life. She later worked in restaurants as a server and a cook. She met the love of her life, Bobby while working at a restaurant. Her last job was as a factory worker at the Charleswood Furniture Factory in Wright City, MO and retired in 1997. Judy was an avid reader all her life, especially fond of true crime and horror. She was an enthusiastic bowler when she was younger, and was a member of the 200 bowling club. She enjoyed time at home with her husband, grandchildren and great-grandchildren during her retirement. Judy is survived by her loving husband, Bobby Shearrer of Troy, MO; one daughter and one son: Kimberly Lawrence and husband Michael of Warrenton, MO and Brian Shearrer and partner Darin Jenkins of St. Louis, MO; siblings: Jack Parker (Mary) of Nokomis, FL, Joan Carson of Falls Church, VA and Jerry Parker (Nancy) of Troy, MO; grandchildren: Ryan Lawrence (Debra), Sarah Jackson (Robbie) and Katie Heflin (Doug); great-grandchildren: Alex Lawrence, Brooklyn Lawrence, Dallas Lawrence, Jaxon Ramsour, Kimberly Jackson, Carley Jackson, Robert Jackson and Dakota Heflin; brother-in-law, Jerry Dickherber of Silex, MO; nieces, nephews, cousins and many friends. She was preceded in death by her parents, one brother and wife, Floyd Church (Wanda), sisters and brothers-in-law: Jean Sorenson (Chuck) and Jane O’Brien (Jim) and Janet Dickherber. Family and friends will be received from 4:00 p.m. to 8:00 p.m. on Wednesday, May 20, 2020 at KEMPER-MILLARD-KEIM Family Funeral Chapel, located at 41 Farm Lane Hawk Point, MO 63349. Funeral service will be held at 9:00 a.m. on Thursday, May 21, 2020 at KEMPER-MILLARD-KEIM Family Funeral Chapel in Hawk Point, MO. Private interment will be held at Rowland Woods Cemetery in Patterson, MO. In lieu of flowers, expressions of sympathy may be made to Rowland Woods Cemetery or Lincoln County Council of Aging or Buddy Bags in care of Kemper-Millard-Keim Family Funeral Chapel, P.O. Box 222 Troy, MO 63379. Arrangements are under the direction of Kemper-Millard-Keim Family Funeral Chapel; 41 Farm Lane Hawk Point, MO 63349. Online condolences may be made at www.kempermillardkeimfamilyfuneralchapel.com Phone 636-338-4375. In accordance with the CDC COVID guidelines, social distancing, and attendance recommendations will be followed.

Judith Leroy Shearrer, 78, of Troy, Missouri, passed away on Saturday, May 16, 2020 at SSM St. Joseph Hospital West in Lake Saint Louis, Missouri. She was born on September 11, 1941 in St. Louis, Missouri was daughter of the late Wilson Tutwiler... View Obituary & Service Information

The family of Judith Leroy Shearrer created this Life Tributes page to make it easy to share your memories.

Judith Leroy Shearrer, 78, of Troy, Missouri, passed away on...

Send flowers to the Shearrer family.