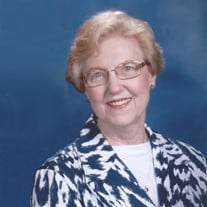 Julie Anne Hoffmann, 75, of Troy, Missouri, passed away peacefully surrounded by her family on Monday, April 10, 2017 in Troy, Missouri. She was born on December 5, 1941 in St. St. Charles, Missouri, a daughter of the late LeRoy and Carroll Hedeman (Ponder) Watts. Julie met the love of her life, Gary Hoffmann in Moscow Mills and was united in marriage on August 18, 1962 at the Sacred Heart Catholic Church in Troy, Missouri. To this union one son and one daughter were born. Julie graduated from Buchanan High in 1959 and continued her education at Missouri University and Miss Hickey’s Secretarial School in St. Louis. She was a secretary at Moscow Mills Elevator and Troy Elevator. Gary and Julie owned and operated Dog and Suds for 19 years, owned Julie’s Catering and later went to work for Harcourt where she retired. She was a member of the Martha Dyer and Betty Pen Club. Julie enjoyed playing bridge, playing cards and shopping. She was an active member of the Sacred Heart Catholic Church and St. Ann’s Sodality. She is survived by her loving husband of 54 years, Gary Hoffmann of Troy; one daughter Beth Anne Roberts of Troy, MO; one son, Michael Hoffmann and wife Cathy of O’Fallon, MO; two brothers: Robert LeRoy “Bob” Watts of Carlisle, Iowa and C. Ronald “Ron” Watts and wife Jan of Wentzville, MO; four grandchildren: Megan, Dylan, Chelsea and Mikayla, nieces, nephews and many friends. She was preceded in death by her parents, Carroll and LeRoy. Friends will be received from 4:00 p.m. to 8:00 p.m. on Sunday, April 16, 2017 at KEMPER-MILLARD-KEIM Family Funeral Chapel, located at 351 Monroe Street Troy, MO 63379. Funeral mass will be held at 10:00 a.m. on Monday, April 17, 2017 at Sacred Heart Catholic Church, located at 100 Thompson Drive Troy, MO 63379. Officiating the service will be Father Tom Wissler. Interment will be held at a later date at Sacred Heart Catholic Cemetery in Troy, MO. Expressions of sympathy may be made to Sacred Heart Catholic Cemetery or Charity of Donor’s Choice in care of KEMPER-MILLARD-KEIM Family Funeral Chapel, P.O. Box 222 Troy, MO 63379. Arrangements are under the direction of KEMPER-MILLARD-KEIM Family Funeral Chapel; 351 Monroe Street Troy, MO 63379. Online condolences may be made at www.kempermillardkeimfamilyfuneralchapel.com Phone 636-528-8221

Julie Anne Hoffmann, 75, of Troy, Missouri, passed away peacefully surrounded by her family on Monday, April 10, 2017 in Troy, Missouri. She was born on December 5, 1941 in St. St. Charles, Missouri, a daughter of the late LeRoy and Carroll... View Obituary & Service Information

The family of Julie Anne Hoffmann created this Life Tributes page to make it easy to share your memories.

Send flowers to the Hoffmann family.