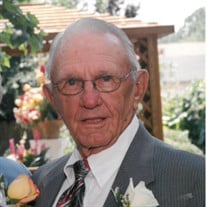 Julius Elmer “J.E.” Bockhorst, 90, of Troy, Missouri, passed away peacefully on Friday, July 10, 2020 in O’Fallon, Missouri. He was born on August 14, 1929 in Moscow Mills, Missouri, a son of the late George Amos and Ruby Jane (Shafer) Bockhorst. J.E. was united in marriage to the love of his life Irene Stauffer-Tiefenthaler on March 3, 1962 in Winfield, MO. To this union one daughter, Cindy was born and he proudly accepted two sons: Larry and Randy to this marriage. Irene preceded him in death on February 17, 2017. J.E. attended Crab Apple grade school and graduated from Buchanan High in 1947. He served his country in the United States Army from November 6, 1951 until he was honorably discharged in August 5, 1953. While in the Korean War he earned a Bronze Star. After he was discharged he purchased a farm in Troy, Missouri and has been a lifetime farmer of Bockhorst and Harris Farms. If J.E. was not on a tractor or taking care of livestock, he was spending time with Irene. J.E. and Irene embarked on several vacations across the United States and shared many good memories in their 54 years of marriage. He was the past President of the Lincoln County Farmer’s Coop Board and helped with the building of the Moscow Mills Community Building. J.E. enjoyed fish fry’s and playing a good card game. J.E. put many miles on his gator patrolling the neighborhood, checking on the guys and the day to day operations of the farm. He is survived by one daughter and one son: Cindy Malone and husband Paul of Troy and Randy Tiefenthaler and wife Bev of Troy; one daughter-in-law, Sandy Tiefenthaler of Troy; six grandchildren: Todd Tiefenthaler of Troy, Josh Harris (Staci) of Troy, Christina Tiefenthaler of Troy, Jacob Tiefenthaler (Lacey) of Troy, Eric Tiefenthaler (Sophia) of O’Fallon and Alex Tiefenthaler of Troy; ten great-grandchildren: Taylor Tiefenthaler, Macey Braungardt, Kylie Tiefenthaler, Shelby VanScoyk, Lexi Harris, Jadyn Harris, Kendall Harris, Levi Harris, Grace Tiefenthaler and Julius Jackson Tiefenthaler; one sister-in-law, Ruthie Stauffer, nieces, nephews and many friends. He was preceded in death by his parents, his wife, Irene Bockhorst, one son, Larry Tiefenthaler, one son-in-law, Brad Harris, two sisters: Ruby Jane Bockhorst and Grace C. Hampel and one brother, Marion Bockhorst, four brothers-in-law: Frank Hampel, Glenn Stauffer, Donald Stauffer and Ronald C. Stauffer, four sisters-in-law: Eleanor Bockhorst, Martha Jean Stauffer; Dorothy Stauffer and Gladys Stauffer, Friends will be received from 4:00 p.m. to 8:00 p.m. on Monday, July 13, 2020 at KEMPER-MILLARD-KEIM Family Funeral Chapel, located at 351 Monroe Street Troy, MO 63379. Funeral service will be held at 11:00 a.m. on Tuesday, July 14, 2020 at KEMPER-MILLARD-KEIM Family Funeral Chapel in Troy, MO. Officiating the service will be Pastor Mark Spence. Interment will be held with full military honors at the Friedens/Anderson Hill Cemetery in Moscow Mills, MO. Expressions of sympathy may be made to Lincoln Pike Cattlemen’s Association in care of KEMPER-MILLARD-KEIM Family Funeral Chapel, P.O. Box 222 Troy, MO 63379. Arrangements are under the direction of KEMPER-MILLARD-KEIM Family Funeral Chapel; 351 Monroe Street Troy, MO 63379. Online condolences may be made at www.kempermillardkeimfamilyfuneralchapel.com Phone 636-528-8221 In accordance with the CDC COVID guidelines, social distancing, and attendance recommendations will be followed.

The family of Julius Elmer "J.E." Bockhorst created this Life Tributes page to make it easy to share your memories.

Send flowers to the Bockhorst family.