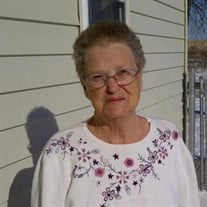 June Catherine Gibson, 83, of Silex, Missouri, passed away on Saturday, September 8, 2018 at the Elsberry Health Care Center in Elsberry, Missouri. She was born on June 3, 1935 in Moscow Mills, Missouri, a daughter of the late Doc Garrison and Alma Hatcher. June was united in marriage to Arnold Gibson on May 16, 1953 in Troy, Missouri and were blessed with one son and one daughter. Arnold preceded her in death on January 14, 2008. June worked as a cook for several years at the Silex R-I School District and later a custodian for the Troy R-III School District. She enjoyed reading her romance novels, working crossword puzzles and word searches. June liked sewing and needle point. She was an avid St. Louis Cardinal’s baseball fan and watched the Nascar races on T.V. June and Arnold enjoyed listening to good ole country music and traveling to Nashville and Branson. Spoiling her grandchildren and great-grandchildren was her top priority. She is survived by her one daughter and one son: Carol Belt and husband Darnell of Fairview Heights, IL and Russell Gibson and wife Laura of Silex, MO; three sisters and one brother: Diane, Irene, Pat and Jack; four grandchildren: Heather Gibson (Sommer Pagel), Jason Gibson (Cathy), Travis Gibson (Becky) and Brandi Jenkins (Darryl); six great-grandchildren: Madison, McKenzie, Ashley, Amarrie, Kyndell and Cayden; nieces, nephews, cousins and many friends. She was preceded in death by her parents, her husband and several brothers and sisters. Friends will be received from 4:00 p.m. to 8:00 p.m. on Tuesday, September 11, 2018 at KEMPER-MILLARD-KEIM Family Funeral Chapel, located at 351 Monroe Street Troy, MO 63379. Funeral service will be held at 11:00 a.m. on Wednesday, September 12, 2018 at KEMPER-MILLARD-KEIM Family Funeral Chapel. Interment will be held at the Auburn Cemetery in Silex, MO. In lieu of flowers expressions of sympathy may be made to the Dementia Society in care of KEMPER-MILLARD-KEIM Family Funeral Chapel, P.O. Box 222 Troy, MO 63379. Arrangements are under the direction of KEMPER-MILLARD-KEIM Family Funeral Chapel; 351 Monroe Street Troy, MO 63379. Online condolences may be made at www.kempermillardkeimfamilyfuneralchapel.com Phone 636-528-8221

June Catherine Gibson, 83, of Silex, Missouri, passed away on Saturday, September 8, 2018 at the Elsberry Health Care Center in Elsberry, Missouri. She was born on June 3, 1935 in Moscow Mills, Missouri, a daughter of the late Doc Garrison and... View Obituary & Service Information

The family of June Catherine Gibson created this Life Tributes page to make it easy to share your memories.

June Catherine Gibson, 83, of Silex, Missouri, passed away on...

Send flowers to the Gibson family.