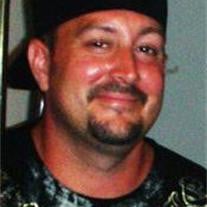 Justin Cole Walston, 34, Troy, Missouri, passed away on Wednesday, May 15, 2013. He was born on July 13, 1978 in Galveston, Texas, a loving son of Sherry Walston and Bill Walston. Justin graduated from Troy Buchanan High School in 1997 and continued his education as an Apprentice in the Carpenters Union. He was employed for Tall Wall Foundation. Justin loved spending time with his boys, they loved four wheeling together, swimming in the river, fishing and camping were some of the boy’s best memories. He would do anything for them if it meant learning or trying something new, was supportive and wanted what was best for them. Justin was a very loving and caring, compassionate person and would always lend a helping hand. He had the biggest heart anyone ever met, there was never a dull moment with him and a lot of fun adventures shared with his family. Justin was an amazing son, father, brother and friend to many and will be deeply missed He is survived by his mother, Sherry Walston (Don Harrell) of Troy, Missouri; three sons, Cole Walston, Steven Walston and Mason Walston all of Troy, Missouri; two sisters, Allison Walston (Joseph Favignano) of Troy, Missouri and Lindsay Walston (Joe Thorpe) of Troy, Missouri; former wife, mother to his three children and friend, Renauta Walston of Troy, Missouri; maternal grandparents, Shirley Barley and Boyd Litteken; aunts and uncle, Pam Howerton, Greg Howerton and Kimberly Howerton; two nieces, Cameryn Thorpe and Arianna Favignano; two nephews, Lucian Thorpe and Daimon Thorpe; numerous relatives and many friends. He was preceded in death by his grandfather, Don Barley, Great-Grandmother, Addie Beard and Aunt, Carla Litteken. Family and friends will be received from 2:00 p.m. to 4:00 p.m. on Sunday, May 19, 2013 at KEMPER-MARSH-MILLARD Family Funeral Home / Troy Chapel. Funeral service will be held at 4:00 p.m. on Sunday, May 19, 2013 at Kemper-Marsh-Millard Family Funeral Home/ Troy Chapel. Interment will be held at the Troy City Cemetery. In lieu of flowers expressions of sympathy may be to the Family of Justin Walston. In care of Kemper-Marsh-Millard Family Funeral Chapel; P.O. Box 222, Troy, MO 63379. Online condolences may be made at www.kempermarshmillardfamilychapels.com Ph.(636) 528-8221

The family of Justin Walston created this Life Tributes page to make it easy to share your memories.

Send flowers to the Walston family.