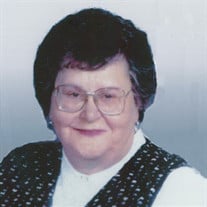 Kathryn A. Weitkamp, 73, of Troy, Missouri, passed away on Sunday, December 7, 2014 at her son’s residence in Jefferson City, Missouri. She was born on January 13, 1941 in Albert Lea, Minnesota, the daughter of Raymond “Toby” Henry and Margaret “Mable” (McGuiness) Koeder. On September 24, 1966 in Wentzville, she married Donald “Preacher” Weitkamp and he preceded her in death on July 31, 2008. To this union three sons were born. Kathryn graduated from Nevada, Iowa in 1960. She worked at the family bakery and retired after 28 years as a Cashier at Kroger’s in Troy. Kathryn enjoyed shopping, crafting, drawing and baking cookies and birthday cakes for her grandchildren. She never knew a stranger and always wanted to help those in need. Kathryn loved spending time with her family and spoiling her grandchildren. She was a member of the Sacred Heart Catholic Church and the St. Ann’s Sodality. Kathryn is survived by her three sons, John Weitkamp of Martinsburg, Mike (Julie) Weitkamp of Troy and Dan (Lisa) Weitkamp of Jefferson City; seven grandchildren, Heather (Jason) Hurkmans, Victoria Weitkamp, Hunter Weitkamp, Dylan Weitkamp, Colt Weitkamp, Donald Joseph “D.J.” Weitkamp and Autumn Weitkamp; one sister, Joan (Don) Gottschalk of Wentzville; one brother, Raymond “Bill” (Georiganne) Koeder of Nevada, IA; two sister-in-laws, Mary Lou Edgar of Troy and Joyce Cawthorn of Fruitland; three brother-in-laws, Larry (Joyce) Weitkamp of Troy, Vic Weitkamp of Wentzville and John Warren of Kirkwood; nieces, nephews, cousins, numerous relatives and friends. She was preceded in death by her parents, her husband, brother-in-laws, sister-in-laws and one niece. Friends will be received from 4:00 p.m. to 8:00 p.m. on Tuesday, December 9, 2014 at KEMPER-MILLARD-KEIM Family Funeral Home / Troy Chapel. A Mass of Christian burial will be held at 10:00 a.m. on Wednesday, December 10, 2014 at the Sacred Heart Catholic Church located at 100 Thompson Drive Troy, MO. Officiating the mass will be Father Tom Wissler. Interment will be held at Sacred Heart Catholic Church Cemetery. Expressions of sympathy may be made to the American Cancer Society in care of Kemper-Millard-Keim Family Funeral Chapel; P.O. Box 222, Troy, MO 63379. Online condolences may be made at www.kempermillardkeimfamilychapels.com Ph.(636) 528-8221

The family of Kathryn A. Weitkamp created this Life Tributes page to make it easy to share your memories.

Send flowers to the Weitkamp family.