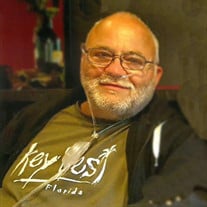 Keith Allen Peavler, 61 of Troy, Missouri, passed away on Saturday, June 27, 2020 at his residence in Troy, Missouri. He was born on November 6, 1958 in Henry County, Indiana and the son of the late Myron and Mary Peavler. Keith was united in marriage to Angelika Eggleston on June 16, 2018 at their residence in Troy, Missouri. He worked for General Motors Wentzville Assembly Center for 36 years as a Tool and Die Maker, where he was a member of the UAW Local 2250. Keith enjoyed riding his Harley Davidson Motorcycle and horses. Keith was a tinker and took great pride in various projects. He enjoyed making memories with Angie and traveling. Keith was always acting silly and spoiling his grandchildren. He was a great husband, father and most of all grandpa. Keith had a great sense of humor and was always wanting to help others. He had a heart of gold and will be missed. He is survived by his loving wife, Angelika Peavler of Troy, MO; two sons: Jared Peavler of Middletown, IN and Adam Peavler (Vanniza) of Middletown, IN; bonus children: Melaine Schultz of Troy, MO and Sean Eggleston of Columbia, MO; brothers and sisters: Gene Peavler (Ola Mae) of August GA, Jimmie Joe Peavler (Linda) of Anderson, IN, Ernie Peavler (Tara) of New Castle, IN, Joyce Parmley of New Castle, IN, Beverly Sutton (Harry) of Indianapolis, IN, Helen Parks (Terry) of New Castle, IN, Marilyn Helsley of Heltonville, IN, Jerry Rice (Mike) of Middletown, IN; four grandchildren and two bonus grandchildren; nieces, nephews, cousins and friends. He was preceded in death by his parents, one brother, Larry Peavler, sister-in-law, Janie Peavler, brother-in-law, Lib Parmley and Jim Helsley. Services are pending at Ballard and Sons Funeral Home and Cremation Services in Middletown, IN. In lieu of flowers, expressions of sympathy may be made to Pulmonary Fibrosis Foundation in care of Kemper-Millard-Keim Family Funeral Chapel, P.O. Box 222 Troy, MO 63379. Arrangements are under the direction of Kemper-Millard-Keim Family Funeral Chapel; 351 Monroe Street Troy, MO 63379. Online condolences may be made at www.kempermillardkeimfamilyfuneralchapel.com Phone 636-528-8221.

Keith Allen Peavler, 61 of Troy, Missouri, passed away on Saturday, June 27, 2020 at his residence in Troy, Missouri. He was born on November 6, 1958 in Henry County, Indiana and the son of the late Myron and Mary Peavler. Keith was united in... View Obituary & Service Information

The family of Keith Allen Peavler created this Life Tributes page to make it easy to share your memories.

Keith Allen Peavler, 61 of Troy, Missouri, passed away on Saturday,...

Send flowers to the Peavler family.