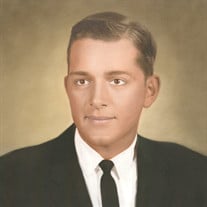 Kenneth Edward Briner, Jr., 69, of Elsberry, Missouri, passed away on Monday, July 14, 2014 at his residence in Elsberry, Missouri. He was born on February 18, 1945 in St. Louis, Missouri, a son of the late Kenneth E. and Renilda (Mosbacher) Briner. Kenneth’s mother and father moved the family to Moscow Mills, Missouri in 1960. He was united in marriage to Linda Holt in 1970 at the St. Alphonsus Catholic Church in Millwood, Missouri. To this union two sons were born. Kenneth graduated school from Buchanan High in 1965. He entered the air force in 1966 and was honorably discharge. Kenneth worked as a laborer for Bumb Construction for 25 years, where he was in the Union Local # 110. He was employed for Royal Oaks Country Club and King Manufacturing. In his earlier years he enjoyed playing on a bowling league. Kenneth had a love for classic cars, he had a 1970 Chevelle restored to its or. He enjoyed gardening, decorating his lawn for the Christmas season and his yearly trips to the Christmas store in Branson. He is survived by his two sons, Jeff Briner and wife, Tracy of Wright City, Missouri and Mark Briner of Elsberry, Missouri; two sisters, Linda Gnade and husband, Kenneth of Old Monroe, Missouri and Kathy Gnade and husband, Russell of Old Monroe, Missouri; two granddaughters, Makayla and DeAsha Briner of Wright City, Missouri; former wife, Linda (Holt) Briner of Troy, Missouri; nieces, nephews and cousins. He was preceded in death by his parents. Friends will be received from 2:00 p.m. to 4:00 p.m. on Sunday, July 20, 2014 at KEMPER-MILLARD-KEIM Family Funeral Home / Troy Chapel. Funeral services will be held at 4:00 p.m. on Sunday, July 20, 2014 at the funeral home. Burial held private for the family at a later date. Expressions of sympathy may be made to the American Cancer Society or Charity of Donor’s Choice. Arrangements under the direction of Kemper-Millard-Keim Family Funeral Chapel; P. O. Box 222, Troy MO. Online condolences may be made at www.kempermillardkeimfamilychapels.com Ph.(636) 528-8221

Kenneth Edward Briner, Jr., 69, of Elsberry, Missouri, passed away on Monday, July 14, 2014 at his residence in Elsberry, Missouri. He was born on February 18, 1945 in St. Louis, Missouri, a son of the late Kenneth E. and Renilda (Mosbacher)... View Obituary & Service Information

The family of Kenneth Edward Briner Jr. created this Life Tributes page to make it easy to share your memories.

Send flowers to the Briner family.