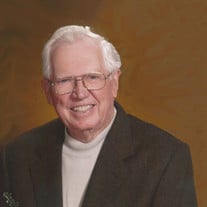 Kenneth Clare Shafer was born in Troy, Missouri on July 18, 1923. He was the son of Mable Annie Clare and Emmett Shafer, who were long-time residents of Troy and who preceded him in death. He had a sister, Dorothy Jean Bendixen (deceased) of Staten Island, NY and a brother, Richard L. Shafer of Troy, MO. Kenneth married Vera Ellen Rudolph of Troy on August 12, 1949 and she preceded him in death on October 9, 2015. Together they had four children, Michael (married to Debi), who preceded his father in death, Mark, Brian (married to Jill) and Carol (married to Sean Walsh). Kenneth was blessed with eleven grandchildren including Greg Shafer (married to Nicole), Benjamin Shafer (partnered with Jay), Tassi Womack (married to A.J.), Robert Shafer (married to Abby), Tiffani Shafer, Justin Shafer, Sarah Shafer, Shannon Walsh, Jesse Shafer, Iris Walsh and Joshua Walsh. In addition, Kenneth has three great granddaughters, Shelby and Chloe Shafer and Estellise Womack. Kenneth graduated from high school in Troy and studied diesel mechanics in St. Louis, MO. He served in the United States Navy during WWII. He was a 2nd Class Petty Officer and worked in the engine maintenance group on the ship LST 712. After the war, Kenneth was a farmer for a few years. Then he spent the remainder of his time as a maintenance mechanic for various companies including: Mallinckrodt, Conductron, and a division of Monsanto-MEMC. He was a long-time member of Troy Presbyterian Church and in more recent years a devoted member of the First Christian Church (Disciples of Christ) in Troy. In addition to supporting Christian charities, he was strongly committed to veterans’ organizations, such as American Legion, Veterans of Foreign Wars and the LST Association. He enjoyed working on the farm he owned with his brother Richard, gardening, snow skiing, fishing, watching the St. Louis Blues Hockey Team and spending time with his family. Friends will be received from 1:00 p.m. to 5:00 p.m. on Sunday, March 6, 2016, at the KEMPER-MILLARD-KEIM FAMILY FUNERAL HOME/TROY CHAPEL, located 351 Monroe Street, Troy, MO 63379. Funeral service will be at 10:30 a.m. on Monday, March 7, 2016 at the First Christian Church, located at 1302 Boone Street, Troy, MO 63379. Interment will be held at the Troy City Cemetery. In lieu of flowers expressions of sympathy may be made to the First Christian Church with a designation directing your contribution to the Kenneth Shafer Ministry Fund or Lincoln County Council of Aging Veterans Coffee Talk. Arrangements are under the direction of KEMPER-MILLARD-KEIM Family Funeral Chapel; P.O. Box 222; Troy, MO 63379. Online condolences may be made at www.kempermillardkeimfamilychapels.com Ph.(636) 528-8221

Kenneth Clare Shafer was born in Troy, Missouri on July 18, 1923. He was the son of Mable Annie Clare and Emmett Shafer, who were long-time residents of Troy and who preceded him in death. He had a sister, Dorothy Jean Bendixen (deceased) of... View Obituary & Service Information

The family of Kenneth Clare Shafer created this Life Tributes page to make it easy to share your memories.

Send flowers to the Shafer family.