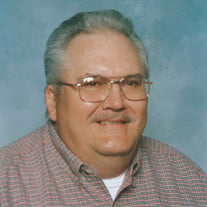 Larry G. Allen, 73, of Troy, Missouri, passed away on Tuesday, January 5, 2016 at St. Joseph Hospital West in Lake Saint Louis. He was born on December 3, 1942 in Pollard, Arkansas a son of the late Denver R. and Leoma Allen. He was united in marriage to Karen Dunlap in June of 1963 in Pollard, Arkansas and she preceded him in death. Larry graduated high school and entered the U.S. Army on December 28, 1959 in St. Louis, MO. While serving his country he earned a sharpshooter badge, expert rifleman badge and was honorably discharged on December 18, 1962. He retired after over 30 years of dedication to McDonnell Douglas Aircraft Company in the Gemini Program and was an all-around machinist. Larry was a car enthusiast and loved tinkering on them. He is survived by his daughter, Chris Rogers and husband Marlin of Troy, MO; one sister, Ramona Magee of Piggott, AR; cousins but share a special bond, Bill Crum and Garcelin Morrow of Warrenton, MO, Arvella Gordon of Piggott, AR and Diana Miller of Paragould, AR; two grandsons: Blake Rogers and Jake Rogers of Troy, MO; nieces, nephews and numerous relatives. He was preceded in death by his parents, wife, one son, Damon Allen in October 6, 2002 and one brother, Fred Allen. Friends will be received from 4:00 p.m. to 7:00 p.m. on Thursday, January 7, 2016 at the KEMPER-MILLARD-KEIM FAMILY FUNERAL HOME/TROY CHAPEL located at 351 Monroe Street Troy, MO 63379. Funeral service will be held 7:00 p.m. at the Chapel. An additional visitation will be held from 10:00 a.m. to 1:00 p.m. on Saturday, January 9, 2016 at the Hoggard & Sons Funeral Home located at 142 N. 3rd Ave Piggott, AR 72454. A graveside service will follow at 1:30 p.m. at the New Hope Cemetery in Pollard, AR. Officiating the service will be Jerry Morgan. Expressions of sympathy may be made to the New Hope Baptist Church Building Fund or The Gideon’s International, in care of Kemper-Millard-Keim Family Funeral Chapels, P.O. Box 222 Troy, MO 63379. Arrangements are under the direction of Kemper-Millard-Keim Family Funeral Chapel; 351 Monroe Street, Troy, Missouri 63379. Online condolences may be made at www.kempermillardkeimfamilychapels.com Phone 636-528-8221

Larry G. Allen, 73, of Troy, Missouri, passed away on Tuesday, January 5, 2016 at St. Joseph Hospital West in Lake Saint Louis. He was born on December 3, 1942 in Pollard, Arkansas a son of the late Denver R. and Leoma Allen. He was united in... View Obituary & Service Information

The family of Larry G. Allen created this Life Tributes page to make it easy to share your memories.