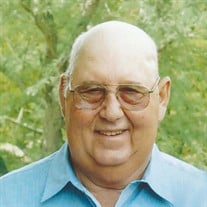 Larry Dean Shepard, 68, of Truxton, passed away on Sunday, November 9, 2014 surrounded by his family at the family farm. He was born March 6, 1946 in Truxton, Missouri, a son of Byron “Ed” and Darlie Shepard. Larry was united in marriage to Kathleen “Gail” Hoffmann on April 27, 1968 at St. Mary’s Catholic Church in Hawk Point, Missouri. To this union one daughter and two sons were born. Larry graduated from Buchanan High in 1964. After high school he was drafted into the Army in January of 1966, served one full term in Korea during the Vietnam War and was honorably discharged on July 13, 1967. Larry and Gail got married and purchased a farm in Truxton, Missouri in 1973. He was a lifetime farmer and he drove a truck for Wyatt Distribution for several years. Larry retired in 2006 from Ralph Jones Contractor as a Heavy Equipment Operator. He was a member of the Hawk Point VFW Post #7560, St. Mary’s Catholic Church and the Cuivre River Wildlife Association. Larry enjoyed fishing, deer and rabbit hunting and sports, especially golf in his earlier years. He was a family man, who worked hard for what he had in life. Larry loved the time spent with his family on the farm and spoiling his grandchildren. He is survived by his loving wife of 46 years, Kathleen “Gail” Shepard of Truxton; three children, Pam LoCascio and husband, John of St. Peters, Brian Shepard and wife, Kymn of Warrenton and Darin Shepard and wife, Cherie of Warrenton; mother, Darlie Lamb of Montgomery; one brother, Ronald Shepard and wife, Shirley of Windsor; half-sister, Nina Schladerbach of Wentzville; six grandchildren, Garrison and Madeline LoCascio, Zack and Nathan Shepard and Allen and Austin Shepard; brother-in-laws and sister-in-laws, Emmett “Junior” Hoffmann, Gary Hoffmann and wife, Julie, Nick Hoffmann and wife, Helen and Patti Hoffmann; nieces, nephews, cousins, numerous relatives and many friends. He was preceded in death by his father Ed Shepard, step-father, Nelson Lamb, siblings, Jean Odem and Jim Shepard and bother-in-laws, Bernie Hoffmann, Vern Odem and Oscar Schladerbach and sister-in-law, Vicky Shepard. Friends will be received from 4:00 p.m. to 7:00 p.m. Wednesday, November 12, 2014 at KEMPER-MILLARD-KEIM Family Funeral Home/Hawk Point Chapel, located at 41 Farm Lane Hawk Point, MO 63349. Funeral Mass will be held at 10:00 a.m. on Thursday, November 13, 2014 at St. Mary’s Catholic Church. Expressions of sympathy may be made to the American Cancer Society or the Hawk Point City Cemetery, under the direction of Kemper-Millard-Keim Family Funeral Chapels P.O. Box 222 Troy, MO 63379. Online condolences may be made at www.kempermillardkeimfamilychapels.com (636) 338-4375.

The family of Larry Dean Shepard created this Life Tributes page to make it easy to share your memories.

Larry Dean Shepard, 68, of Truxton, passed away on Sunday, November...

Send flowers to the Shepard family.