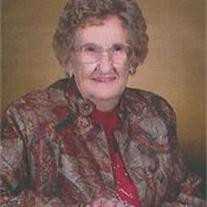 Laura Belle (Gerdeman) Helmich, 103, of Moscow Mills, passed away on Friday, September 13, 2013 at the Lincoln County Nursing and Rehab. She was born on July 13, 1910 in Troy, Missouri, a daughter of the late Theo and Daisy (Craig) Gerdeman. She united in marriage to Arlie Helmich on August 23, 1938 and he preceded her in death on December 4, 2002. To this union one daughter was born. She lived her whole life in Lincoln County, graduated from Buchanan High School and she continued her education as a teacher. She taught for the Lincoln County RIII School District for 34 years prior to her retirement. Laura was a lifetime member of Friedens United Church of Christ in Moscow Mills, where she served on the church board, the building committees and the women’s fellowship. She was a member of the Moscow Mills Lions Club, Retired Teachers, Owen Olive Women’s Club, Elizabeth Wilkinson Extension Club and 4-H leader. Laura was honored to receive the Melvin Jones Award from the Moscow Mills Lions Club. She enjoyed watching the St. Louis Cardinals play baseball, playing dominoes, reading, crocheting, knitting, cooking, quilting and having company over. As an adventurous woman celebrating her 99th birthday she rode on the back of a Harley Motorcycle, 100th she took a ride in a hot air balloon, 101st she rode in a small airplane over the family farms and 102nd she visited the St. Louis Science Center. She is survived by her loving daughter, Linda Sullivan and husband, Ron of Moscow Mills, Missouri; one granddaughter, Darla Lambert and husband, Steve of Springfield, Illinois; nieces, nephews, cousins and many friends. She was preceded in death by her parents, her husband, three sisters, Nita Kennedy(Charlie), Lucille Martin(Silvy) and Helen Davis(Herman);niece, Melba Paulsmeyer; nephews, Dale Davis, Irvin Davis and Teddy Martin and one great-great-niece, Olevia Lucille Crane. Friends will be received from 2:00 p.m. to 8:00 p.m. on Sunday, September 22, 2013 at KEMPER-MARSH-MILLARD Family Funeral Home / Troy Chapel. Funeral services will be held at 11:00 a.m. on Monday, September 23, 2013 at Friedens United Church of Christ in Moscow Mills, Missouri. Officiating will be Pastor Eugene Rahmier. Interment will be held in Friedens (Anderson Hill) Cemetery. Expressions of sympathy may be made to Friedens UCC or Moscow Mills Lions Club. Arrangements under the care of Kemper-Marsh-Millard Family Funeral Chapel, 351 Monroe Street Troy, MO 63379. Online condolences may be made at www.kempermarshmillardfamilychapels.com Ph.(636) 528-8221

Laura Belle (Gerdeman) Helmich, 103, of Moscow Mills, passed away on Friday, September 13, 2013 at the Lincoln County Nursing and Rehab. She was born on July 13, 1910 in Troy, Missouri, a daughter of the late Theo and Daisy (Craig) Gerdeman.... View Obituary & Service Information

The family of Laura Helmich created this Life Tributes page to make it easy to share your memories.

Send flowers to the Helmich family.