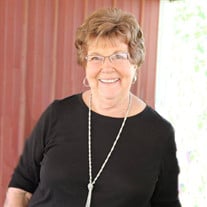 Laveda P. Pendleton-Ferren, 80, of Bonita Springs, FL, formerly of Troy, Missouri, passed away on Saturday, December 24, 2016 at Barnes-Jewish Hospital in St. Louis, Missouri. She was born on September 18, 1936 in St. Louis, Missouri and was the daughter of the late Roscoe and Edith (Seibert) Robertson. Laveda was united in marriage to Dallas Ron Pendleton and to this union two children were born: Pam and Dale. Ron preceded her in death in 1985 and she later married Raymond Ferren. After Laveda graduated from high school she became a cosmetologist. She owned and operated Laveda’s Beauty Shop in Troy for many years and was later a Flight Attendant for Trans World Airlines. Laveda was always there for her children, grandchildren and great-grandchildren no matter how many miles were between them. She enjoyed playing a good game of cards, spending time with the ones she loved and sharing many good laughs. She is survived by one daughter, Pam Cannon and husband Mike of Troy, MO; one son, Dale Pendleton and wife Mary of Clayton, MO; one sister, Evadene Myers of Kimberling City, MO; grandchildren: Carrie Darnell and husband Steve of Troy, MO, Cale Cannon and wife Kim of Troy, MO, and Morgan Brown and husband Zac of St. Louis, MO; great-grandchildren: Dane and Dallis Darnell and Dylan Cannon; nieces, nephews and many friends. She was preceded in death by her parents, husband, Ron Pendleton, one daughter-in-law, Dena Pendleton, one granddaughter, Berkley Pendleton and one brother-in-law, Harold Myers. The family invites everyone to celebrate Laveda’s life from 10:00 a.m. to 11:00 a.m. on Thursday, December 29, 2016 at KEMPER-MILLARD-KEIM Family Funeral Chapel located 351 Monroe Street Troy, MO 63379. Funeral service will be held at 11:00 a.m. on Thursday, December 29, 2016 at Kemper-Millard-Keim Family Funeral Chapel. Officiating the service will be Pastor Jeffrey Moore. Interment will be held at the Thornhill Cemetery.In lieu of flowers expressions of sympathy may be made to the Siteman Cancer Center, in care of Kemper-Millard-Keim Family Funeral Chapels, P.O. Box 222 Troy, MO 63379. Online condolences may be made at www.kempermillardkeimfamilychapels.com Phone 636-528-8221

The family of Laveda P. Pendleton-Ferren created this Life Tributes page to make it easy to share your memories.

Send flowers to the Pendleton-Ferren family.